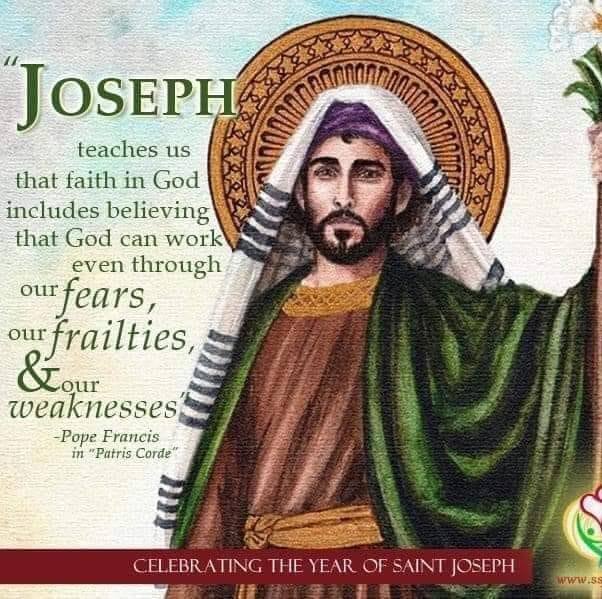 From the Newsletter of the Communauté de Jérusalem

It may seem strange, but I see in Saint Joseph a model of monastic life. Indeed, Joseph is more often known as the patron of the Church, as the keeper of the Redeemer or as a role model for fathers of families. But looking closely at the biblical account, one can see that he lived the monastic vows with great eloquence. He lived in obedience not only to the voice of the angel, but also to Mary and even more to Jesus. He lived chastity in a particularly fruitful way by welcoming the Savior into his home! And he lived in poverty, evangelical simplicity with great humility. For me, Saint Joseph lived the three monastic vows as a precursor.

What touches me most about him is that he speaks without saying anything. His eloquence is not in his words, it is to be contemplated in his gesture, in his faith, in his love for Mary.

Philosopher Henri Bergson said: “Great good men don’t need to exhort; they only have to exist; their existence is a call ”(The Two Sources of Morality and Religion). Joseph preaches by his way of serving others, by his way of serving God in his Son. In short, as the Dominican Philippe Lefebvre rightly says, in Joseph, we can admire “the eloquence of a taciturn”!

How did you get Joseph’s first name and how does it support you in your life?

I must admit that Joseph’s name did not come to me immediately. It was a few months before my temporary profession, we were reading in the refectory a book on Brother André of Montreal. I was struck by his immense devotion to Saint Joseph. He gave him absolutely everything. Saint Joseph was not only an example, but also as an everyday companion. It was then that I made the connection between the life of Joseph and the monastic life. I saw many parallels between my short life and his (I grew up in the middle of the boards, I like working with wood, I’m not a big talker, etc.) But also, much later, thanks to an analysis of the biblical scholar André Wénin, I rediscovered the figure of the other Joseph, that of the book of Genesis. A great light and a great hope for fraternal life emerge from this story. I like to come back to it from time to time and let myself be taught by this wonderful story.

In short, bearing Joseph’s name is a great gift. Maybe I have to learn to trust him a little more, because then I am far from being like Saint Andrew of Montreal, but I dare to believe that each time I sign with my religious first name, it is like a little wink that I exchange with him.

Is there a representation of Saint Joseph that you particularly like?

There are actually two. The one that represents the 7 pains and joys of Saint Joseph. This icon is inspired by the Gough Psalter, dating from the 13th century. The highlights of Joseph’s life are shown in small bubbles and in the middle, Joseph is reading and teaching Jesus the “Shema Israel”. And Jesus, with his hand placed behind his ear, manifests his attentive listening. So that Jesus no doubt teaches Joseph how to pray, how to be Son and how to receive himself from the Father.

I also like this representation made by a brother from Jerusalem where we see Joseph carrying Jesus as in the icons of the Virgin of tenderness.

Just as Saint Joseph is the patron saint of the universal Church, as Pius IX decreed in 1870, the brothers in Jerusalem chose him as their patron saint. Perhaps because Saint Joseph shows us how to overcome difficulties with courage, or because he knows how to awaken in us resources that we did not even think we had, or again, as Pope Francis says, because “The carpenter of Nazareth knows how to transform a problem into an opportunity, always trusting in Providence ”? In any case, we can invoke him with confidence and without restraint because, as Saint Teresa of Avila says: “Joseph never disappointed me. “

To this end, Saint Joseph’s Oratory of Mount Royal offers a prayer to Saint Joseph, which I love very much. I give you an extract:

you are called the Righteous, the Carpenter, the Silent.

I want to call you “my friend”.

With Jesus, your son and my Savior,

with Mary, your wife and my Mother,

you have your place in my heart,

you have your place in my life.

you who walked through falls and shadows,

teach me to meet the Lord in my daily life.

You, the astonished witness of the action of the Spirit,

help me to recognize his wonders and be submissive to him.

You, always attentive to the needs of your neighbours,

keep my heart and my hand open.