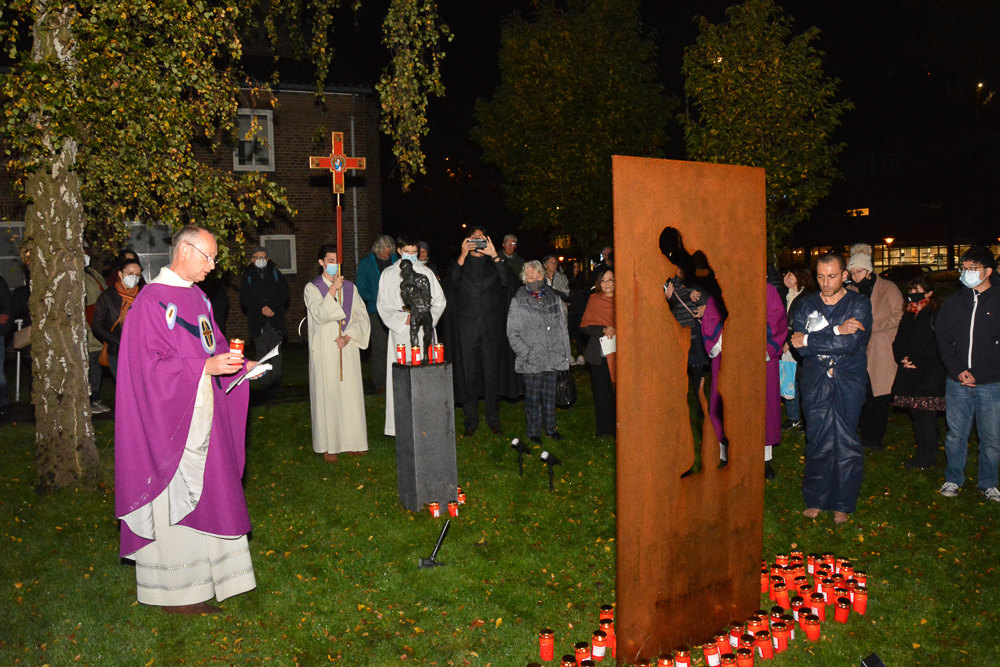 In a special place in The Hague. At the memorial for perished refugees. Faceless people, like boat migrants, washing up on a European beach. Father Sjaak de Boer MHM, pastor at the Roman Catholic Church of Our Savior, thought it was time for a matching monument: ‘We know the monument to the unknown soldier. This is the monument to the people who had to flee from injustice. Who died anonymously in the desert or at sea. We commemorate those people for the first time here.”

Sjaak de Boer, a former missionary in Brazil, is the pastor of a lively Anglophone community at the Church of Our Savior in Bezuidenhout in The Hague.

It is a church where sorrow drips from the walls like tears. Where the Allies carried out a mistake bombing on March 3, 1945: 550 dead civilians. The church is partly built up with chipped rubble.

The Hollow Men memorial has been in the garden near the church since April this year. It is co-financed by the aid organization Cordaid. The monument, designed by artist Linette Dijk, shows a bronze statue with a backpack and a rusted steel plate.

A hollow person, an empty shadow.
Someone who is there, but who you don’t know about.
Or want to know?
Refugees, for most of us faceless people.
I saw them go.
In Congo, Rwanda, Kenya, South Sudan.
With a face.
Loaded, with what little they had.
Some food, a sleeping mat, children, old people, leaning on a cut tree branch, sometimes falling down.
Just like that.
To never get up again.
Often thought: this must have been the case with us too.
During all our conveniently forgotten little wars. When cities had walls, instead of cameras.
And here armed bands plundered all around.
Or later ‘we’ refugees in the Hunger Winter.
And after the (Flood) Disaster…!

Their monument is in a symbolic place, says Sjaak de Boer: “A few hundred meters from Huis Ten Bosch royal palace and close to the new parliament building.”

Until recently, the flowers that people laid down in the Lange Leidsedwarsstraat in Amsterdam, the place where Peter R. de Vries was shot, were relocated here at the monument. Because of his involvement with victims of injustice.

At that spot in The Hague, the ‘international city of peace and justice’, the people of the Our Savior parish gather on All Souls’ Day, candle in hand. To commemorate.

And for words of hope and optimism.

In his homily, Sjaak de Boer draws attention to ‘the vulnerable soul of Mother Earth’: “God chose a relationship with our planet and everything that lives on it, even if that life is destroyed by crimes against nature. Who are we to make it bad?” And, further alluding to the climate summit in Glasgow: “It takes place during All Souls’ Day. Mother Earth is sick and asks for healing. Let us invest in the good before it is too late.”

Meditation, silence, a few moments of remembrance, compassion, with the warmth of a candle. Looking at the silhouette of man, who is on his way and on the run, the hollow men.

In rickety boats on the Mediterranean or somewhere in the sand under a scorching sun.
Often nameless dying.

Around the world 80 million people are displaced.
Just imagine: almost five times the population of the Netherlands.
Confrontational too.

Because, who are the hollow men?
Those who disappeared?
Or us?