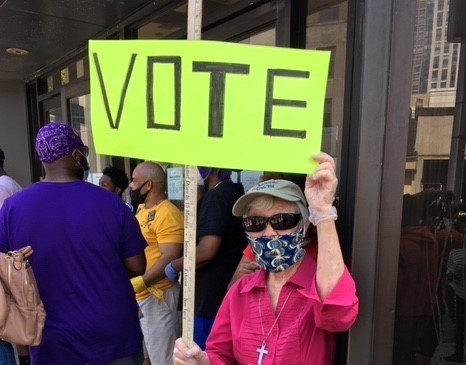 If I am disappointed that American Catholicism is not bringing to our politics what Pope Francis has called “the joy of the Gospel,” it is an impatience born of gratitude, not bitterness. Perhaps that’s why I have used the restrained word “underperforming” to describe what others might fairly see as the scandalous failure of its leadership to speak fearlessly and consistently against the social and moral failures of the Trump presidency.

So much of what I believe has been shaped by the Catholicism I learned from my parents, from the Sisters of St. Joseph, and from the Benedictine monks who taught me in high school. It’s true that I remain enraged by the scandals and can easily identify with those who have left the Church in disgust; they include many people I am close to.

Yet I continue to admire the work on behalf of charity and justice undertaken by so many of the institutions the Church has built. As I have already suggested, I see Catholicism—particularly in its post–World War II form—as offering intellectual resources the democratic world can use at a moment when democracy finds itself in crisis.

This only deepens my sadness over the narrowing of the American Church’s public witness and its failure to take advantage of the enormous opening Pope Francis’s papacy offers. Now should be a time for a renewed embrace of a social Catholicism that gave rise to Christian Democracy, a vibrant Catholic role in the labor movement, and a healthy, dialectical relationship with modernity.