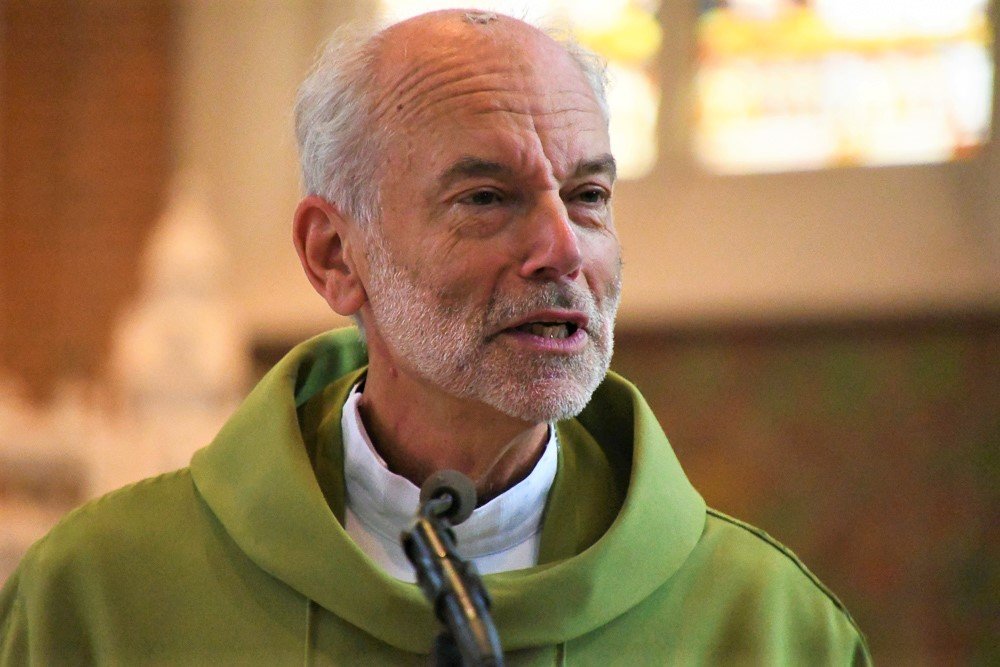 Today, Sunday 5th July, Fr Thaddeus de Deckere mhm was officially inducted as ‘parish vicar’ (assistant priest) of a huge pastoral area covering most of the province of Zeeland in the diocese of Breda, The Netherlands.

This pastoral area going under the name of ‘Boven de Schelde’ (Above the Scheldt) comprises two parishes with 12 subcentres each covering a number of urban areas, villages and hamlets.

A team of two priests, a number of lay pastoral assistants and a cloud of volunteers form the nucleus of a widely dispersed Christian community that seeks to be a vibrant witness of the vitality of the Gospel message.

Social distancing and assorted coronavirus regulations were duly observed at this morning’s Eucharist in the the Mary Magdalene church in the town of Goes.

The Sunday’s  gospel reading: ‘Come to me all you who labour and are burdened’…..My yoke is easy and my burden light’ seemed strikingly apt to the occasion.

In his address at the end of the celebration Fr Thaddeus spoke of his earlier missionary involvement in India where he lived and worked among the poorest of the poor (Dalits) for some time. ‘Now here’, back in the country and region where I was born, I carry those experiences with me – equipped with a keen eye for people on the margins’.

What follows is an abridged version of an interview published in the local PZC newspaper :

If his visa had not expired, he would probably still live in a slum in India. He loves that country. But Varanasi has become Burgh-Haamstede. Thaddeus de Deckere is the new priest for Catholic Zeeland above the Western Scheldt. He is looking forward to that. “I can be happy

Father Thaddy, as he is commonly called, has recently started living in the very modest presbytery at the tourist church in Burg-Haamstede. A small living-cum-bedroom and a modest kitchen, there is not much more. But for someone who has lived in India in places that had no amenities at all, that is already a lot. In Varanasi he lived in a small house among the casteless. “It was a place where you don’t really want to live. With a lot of dirt and bad smell. You were actually just at great risk with your health. But my colleague (Frans Baartmans mhm) who had been there for some time, wanted to live there precisely for that reason. “You can really makes a difference there,” he said. Then I thought: I want that too! ”

De Deckere (61) returned to the Netherlands at the end of last year after thirty years of foreign adventures. He offered his services to the Diocese of Breda, which also includes Zeeland. Bishop Liesen did not have to think long. In the region above the Western Scheldt they could still use a parish priest, because both the Father Damien parish (Zuid-Beveland and Schouwen-Duiveland) and the Maria Parochie (Walcheren) had only one resident active full-time priest in the pastoral team in the person of Fr Fons van Hees. Father Thaddy’s arrival was therefore received with great joy.

De Deckere had a fairly carefree childhood, but did end up in a crisis of faith in his late teens. Even then – we are talking about the second half of the 1970s – the Catholic Church was already dealing with dwindling church attendance. “Why would I stay then?”, he thought. Yet that thought never got the upper hand, partly due to the good conversations he had as a teenager had with the then parish priest Fr Leo Heijnen of Terneuzen. “All in all, I spent a year and a half searching and questioning intensely. But in the end I firmly embraced the faith again. ”

After secondary school De Deckere enrolled at the agricultural university in Wageningen. You could say that the first signs of his adventurous character already appeared then. Where many students returned to Mom and Dad with a bag full of dirty laundry on Friday after the last hour, De Deckere only returned home once every three or four weeks. He wanted to become independent. After an internship in Brazil, he really took flight. “That was a huge broadening of my horizon.” The Catholic boy from Zeeland Flanders conducted research in South America into the use of pesticides in the cultivation of cotton and soy, among other things, and felt at home there. To his own surprise, he quickly got a decent grasp of Portuguese.

At the end of his studies he was offered a job as a teacher at the Secondary Agricultural School in Roermond. He later got a permanent position there. But something stirred in him. The urge to travel had taken over the 20’s permanently. He thought of voluntary work in Africa, to apply his knowledge as an agricultural engineer there. During his search he came into contact with the Mill Hill Missionaries, a congregation that was founded in England in 1866, and quite soon afterwards also founded a mission house in Roosendaal. “For years I drove past it, on my way to Wageningen, without knowing it was there,” he reflects looking back. At the age of 25, De Deckere joined the missionaries, and after seven years of study, he was ordained a priest in 1991 by Bishop Ernst.

The Zeeland-born native was sent to India as a missionary. It did not take much effort to enclose the country and its inhabitants in his heart. His language skills also came in handy here. De Deckere stayed in different places in India, each with its own difficult language, but always managed to make himself understood reasonably quickly. While spreading the gospel is the goal of Mill Hill’s missionaries, De Deckere says he has never considered converting people or, as it is sometimes said, “winning souls” as his main task. Of course, he wanted to spread the joyful message of Jesus Christ, but “doing good” was his primary mission. “The church grows best through attraction,” he says.

That is how at one point he ended up in Varanasi, the Indian holy city on the Ganges river. He deliberately went to live in a small house in a slum, surrounded by poor casteless people. A fellow priest (Frans Baartmans mhm) who had been there for some time had created a vegetable garden and even founded a school with support from the Netherlands. “We tried as well as we could to improve people’s living standards,” said De Deckere. “I saw a lot of suffering in those years. It was also physically taxing. Yet those were the most beautiful years of my time in India. ”

De Deckere was able to stay in the country with temporary visas, but to his regret this arrangement  ended ten years ago. Otherwise, he probably would have stayed in India forever. After a further ten years in England working for the congregation of Mill Hill, including as general secretary, he returned to the Netherlands at the end of last year.

As a priest of the two parishes mentioned above, he will, among other things, lead the Eucharistic celebrations in various Catholic churches all over the region ‘above the Western Scheldt’.