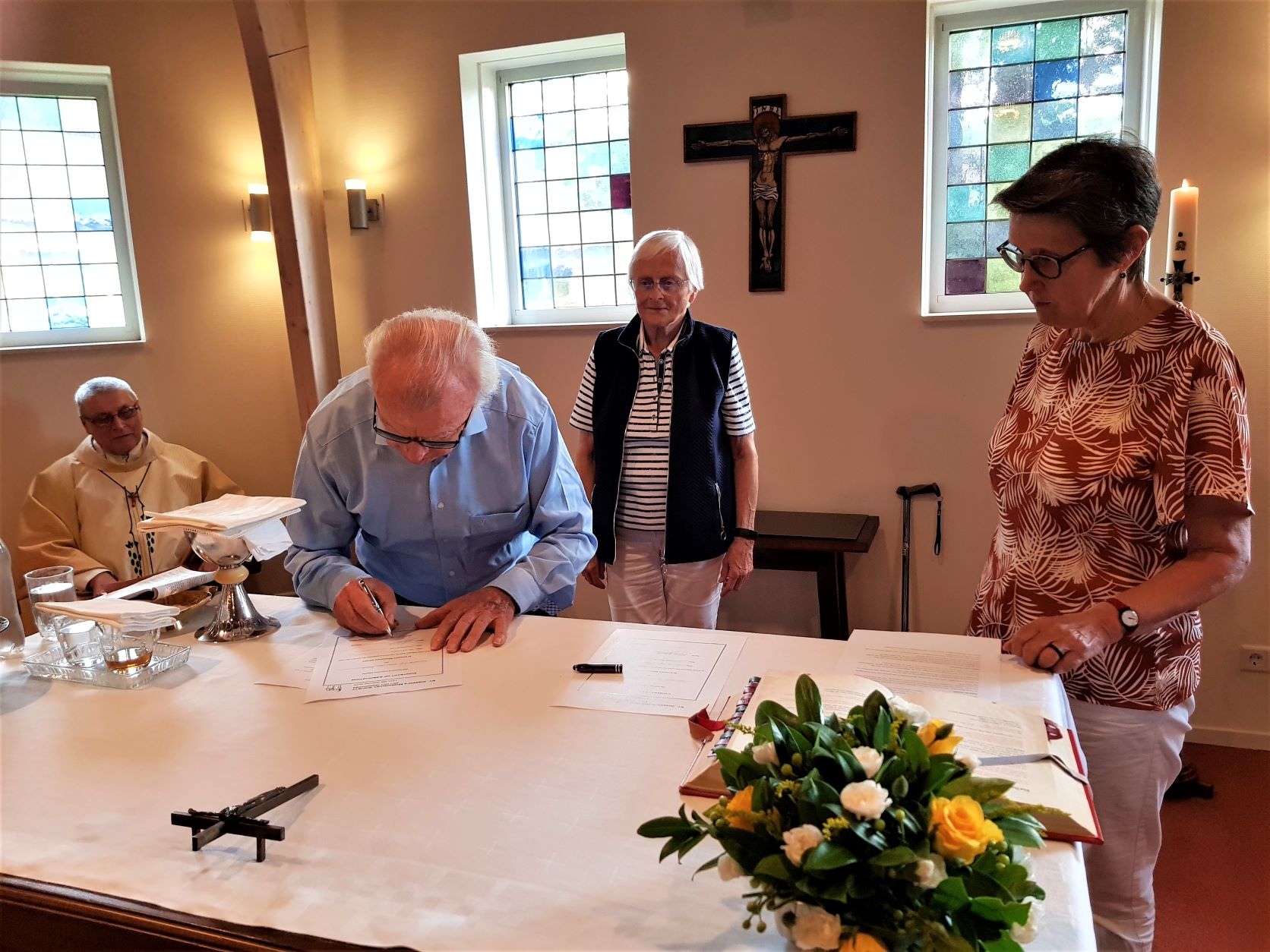 As a result of the renewal of the Mill Hill contract of association, I was asked what my activities in connection with Mill Hill have been.

Now that I think about it for a moment, I come to the conclusion that I have to go back to my childhood and early youth.

From an early age we went to the farmers in the polder to pick up or empty the Mill Hill red boxes. We were called zealators. Initially these boxes were rectangular metal cans, later they became plastic globes in red and black (and much later they became tin cans, which we used for this purpose in Kenya and Uganda.)

Once a year all zealators were invited to Roosendaal for a nice get-together.

Selling mission calendars was also part of it every year.

And a bit of unusual activity was to load harvested potatoes onto a wagon which were then taken to Mill Hill Roosendaal and/or Tilburg. Just those chores (among other things, of course) to make it possible for Mill Hill to keep the formation courses running.

Then there was the MITO fair in Roosendaal every year, which we always went to. That was a real outing! It had nothing to do with “being an associate”!

When I decided to go to Kenya in 1999, I ended up in the Pandipieri (Mill Hill) project to lend a helping hand to the street children program. I supported the teachers and accompanied a group of children who needed extra attention, especially in math. But most of the time I spent in recreation with the kids: a game of cards or football, a walk to the antelope park or to Lake Victoria for fishing and/or swimming, playing board games, etc.

Every now and then I went with the social worker to place children back at home. That rarely worked for long. As long as the home situation did not improve, the children did not find a home that could help them further.

In the evenings I went along faithfully with Mill Hillers, who made home visits to the sick and the elderly. That has always made a deep impression on me. I found the joy of life of the people in their shabby houses admirable.

After a few years, on the advice of some Mill Hillers, I applied to Mill Hill London to become an associate.

How businesslike and technical that sounds: signing a contract of association! But yes, a name had to be invented for the lay associate member of Mill Hill.

I don’t know if it had to do with the association, but soon after I was appointed to the management team of the Pandipieri project. It became my job to take care of everything that had to do with education: kindergarten, primary school, domestic science school, carpentry workshop, masonry workshop, art school, computer training, etc. Discussing the annual plans, drawing up class schedules together with the teachers, calculating and paying salaries, trying to keep the maintenance of the schools in order, looking for internships for the domestic science school, supervising the construction of a new domestic science school, it was all part of it. I didn’t complain about being bored as there was plenty to do.

At the beginning of 2007 I was appointed in Uganda to another Mill Hill-tinted project: Huijs Link Community Initiative (Huyslinci) in Abaitababiri in Entebbe.

There too underprivileged children and youth were helped in similar program components, with a musical exception: the brass band.

The project was still in its infancy and needed a lot of help on various fronts.

Here too I performed supporting work, mainly in administration, fundraising and accounting. Because the project was located in a (too) small, rented house, we worked hard to find and pay for new accommodation. We were able to buy a vacant piece of land and built a beautiful building there with space for all program components, including a large hall, which can be rented out for weddings and parties in the future to allow the domestic science students there to earn a living.

In 2012, Mbikko parish needed assistance, so I was appointed to Mbikko. I also did a lot of administrative work there.

After a few years I finally moved to Panyangara in Karamoja.

Due to all sorts of circumstances they were far behind with the updating of the baptismal books and there were lots of baptism. I entered thousands of names, but also registered them on the computer. A predecessor had set up a handy user friendly system, which allowed you to easily find requested names and dates of baptisms with their parents, godparents and godmother if they needed this. When I left in 2016, the entire system was up to date.

And from 2016 I am an associate in retirement. I don’t have fixed tasks, but where necessary I can offer a helping hand, here around home or at Mill Hill Oosterbeek.

And on Sunday 15 August (on a radiant, sunny day) I renewed my contract for 5 years. It was a casual, cozy get-together, during which I signed my contract at the same time as Toos Beentjes. And in 5 years, with life and well-being, we’ll see again.