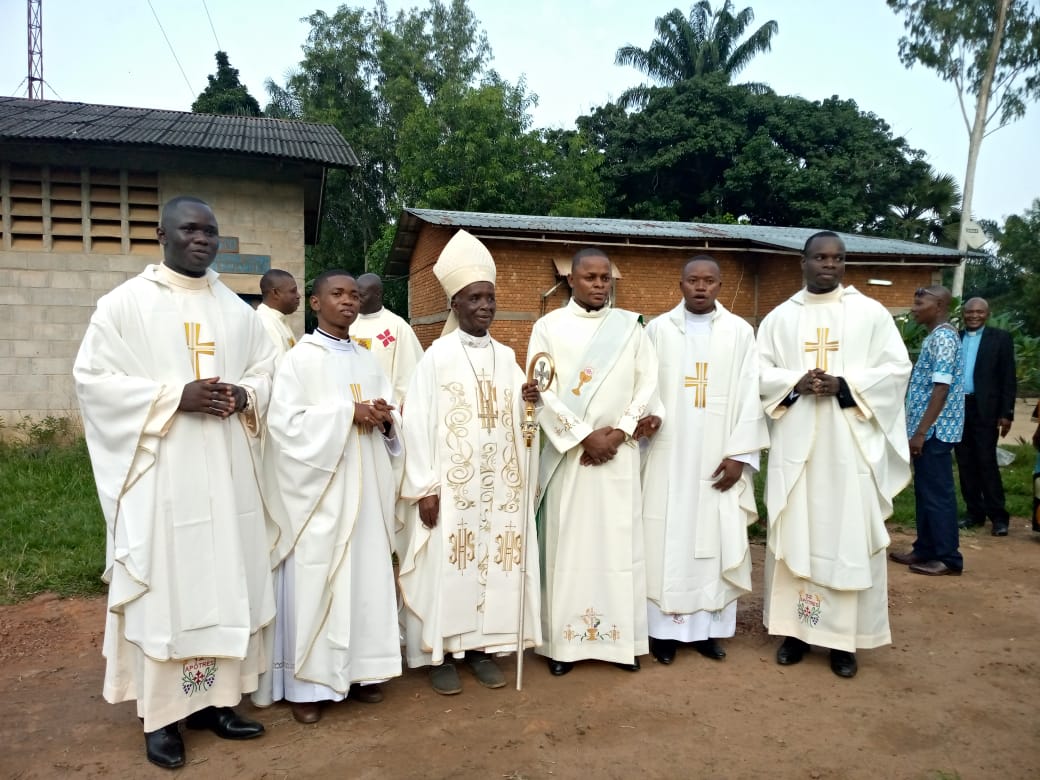 The Diocese of Basankusu , in the Province of Equateur, celebrated the ordinations of a new Deacon and four new Priests, this Sunday, July 24, 2022. The ceremony took place in the Cathedral of Saints Peter and Paul of Basankusu .

In front of more than five thousand faithful, the Local Ordinary, Monsignor Joseph MOKOBE NDJOKU, ordained four Priests. Two on behalf of his Diocese. They are Frs Pie-Roger ILONGA EALE and Jean-Baptiste LOKULI. And two others on behalf of the MILL HILL Missionary Society, Fathers Fréderic BOTAKA YUFELA and LEKANDOME EKOKOYO. On the same occasion, he ordained Deacon, Acolyte Giscard KAALA BONGOMBE.

This sufficiently proves that we are capable of straightening out life at home, affirmed the Bishop of Basankusu . If everyone agrees to get involved, by putting together will and positive initiatives, hearts and love, determination and commitment, honesty and justice, faith and truth, we can soon take off and move life forward here and now.

Like Jeremiah, son of Helkias , one of the Priests who were in Anatoth , in the territory of Benjamin, Monsignor MOKOBE made the new Priests and the Deacon see that God always chooses and calls men to send them on a mission. He calls them from their families, their living environments and their societies. The called must have their eyes turned towards the people to whom they are sent, observe their realities and their living conditions. Through your ordination, the Lord has consecrated you and made you prophets to the peoples. He puts his words into your mouths to uproot and tear down, to tear down and destroy, to build and plant. When you go into the ministry, denounce the evil with force, do not be afraid of those who manipulate our youth for their selfish interests, of those who arm the youth and incite them to violence and tribal hatred, of those who inoculate the hearts of young people with the venom of hatred, of those who allow themselves to arm young people to kill each other. They must know that they have no right to behave like this, insisted Monsignor MOKOBE.

The Prophet Jeremiah did not have an easy life. He encountered difficulties which did not shake him. Don’t just stop at denouncing evil, but you will have to plant more good, encourage good initiatives, strengthen your brothers in the faith. And it is the same mission that Jesus entrusted to his Apostles, that of teaching, planting and cultivating love. A mission that always encounters ill-intentioned people whose only fundamental concern is to sow terror and disarray. My Sons, the one who sends you is Christ, underlined the Father Bishop. Saint Paul tells us that the love of Christ urges us. Never give in to discouragement. Nor should we give in to revolt to reject good advice. The fact of becoming a priest or deacon does not exempt you from the requirement of conversion which must take place every day and at all times. It is a grace to meet people who give you good advice, concluded Monsignor MOKOBE.

With these ordinations, the Diocese of Basankusu currently has 60 Priests and 1 Deacon. And on behalf of the Missionary Society of MILL HILL 7 Priests. One of them died, the Reverend Father Otto BAMBOKELA MPETSI. May he rest in peace.