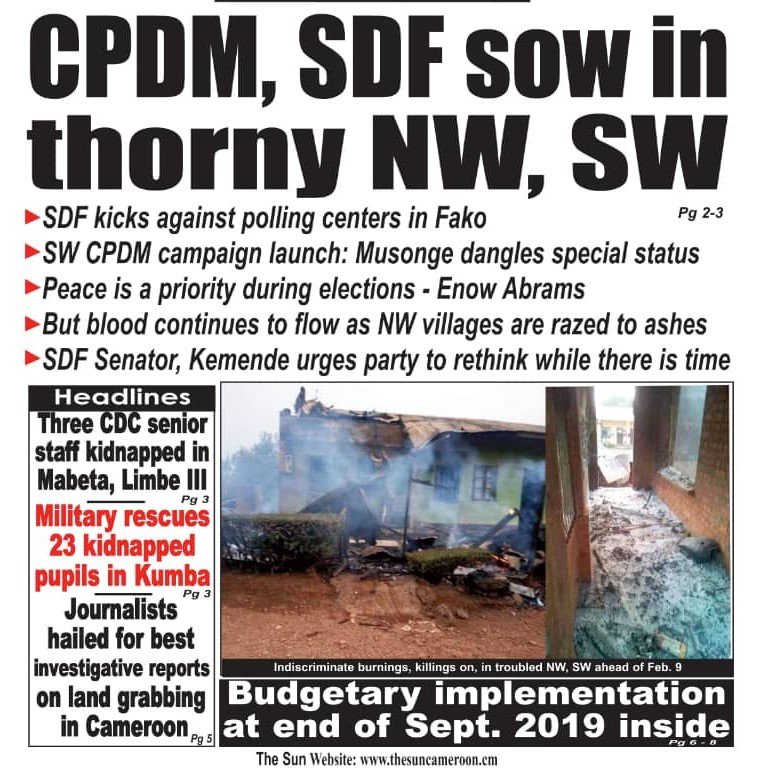 For a couple of weeks now, we have had reports and graphic images of barbaric and inhuman acts, shootings, killings, and colossal collateral destruction of property through the burning of houses in some localities and villages in the North West and South West regions of Cameroon viz. Babubock and Eyandong in Kupe; Muanenguba, Ku-Bome in Mbengwi; Mbiame in Bui; Mbenjom in Awing; Guzang in Batibo; Bali-Kumbat in Ngoketunjia; Buabua and Kimbirivers in Bum. Fingers are being pointed at the military, armed fighters and herdsmen particularly in the Bum area for these acts of brutality and dehumanization.

Last Sunday in Sang in Bali-Nyongha, an ordained pastor of the Presbyterian Church in Cameroon (PCC) in liturgical attire was arrested in the church compound after worship service. This pastor was brutalized, incarcerated, and later released and hospitalized. These acts of barbarity and inhumanity violate the sacredness of human life and are sacrilegious to the worship of God.

Furthermore, these inhuman actions contradict and render null and void the resolutions and the spirit of goodwill underneath the Grand National Dialogue. As a church of God, and in keeping with our prophetic voice we strongly condemn the perpetrators of these acts of violence on God’s people and fellow compatriots of the North West and South West regions. These acts of violence frustrate the fragile efforts on the ground to facilitate a return of people and activities to some form of normalcy.

It is now clear that the proposed conducting elections on February 9, 2020 in the North West and South West regions may not be possible under such circumstances as it does not permit full participation of the population.

The government of the Republic of Cameroon must now show mastery of the situation on the ground and increased determination to implement the resolutions of the Grand National Dialogue in a way that will precipitate a cessation of violence, a sense of justice and a peaceful atmosphere. We once more re-echo the fact that violence or military might is not the way out of this crisis.

By the same token, through this opportunity, we express the tears and the pains of the local population as they suffer daily molestation, kidnapping and extortion at the hands of armed groups. Enough is enough, stop this violence, stop killing God’s children and stop destroying the earth, it does not produce any good and does not legitimate any course neither does it progress human civilization. For God’s sake can we unite and genuinely seek a lasting solution to this crisis and give God’s children, justice and peace a chance and spare us the continuous flow of blood?

“The peace of God which passes all human understanding keep your hearts and minds in the knowledge and love of God, and of his Son Jesus Christ, our Lord; and the blessing of God Almighty, the Father, the Son, and the Holy Spirit, come upon you and remain with you always.” Amen.

Yours for the Sake of the Faith,