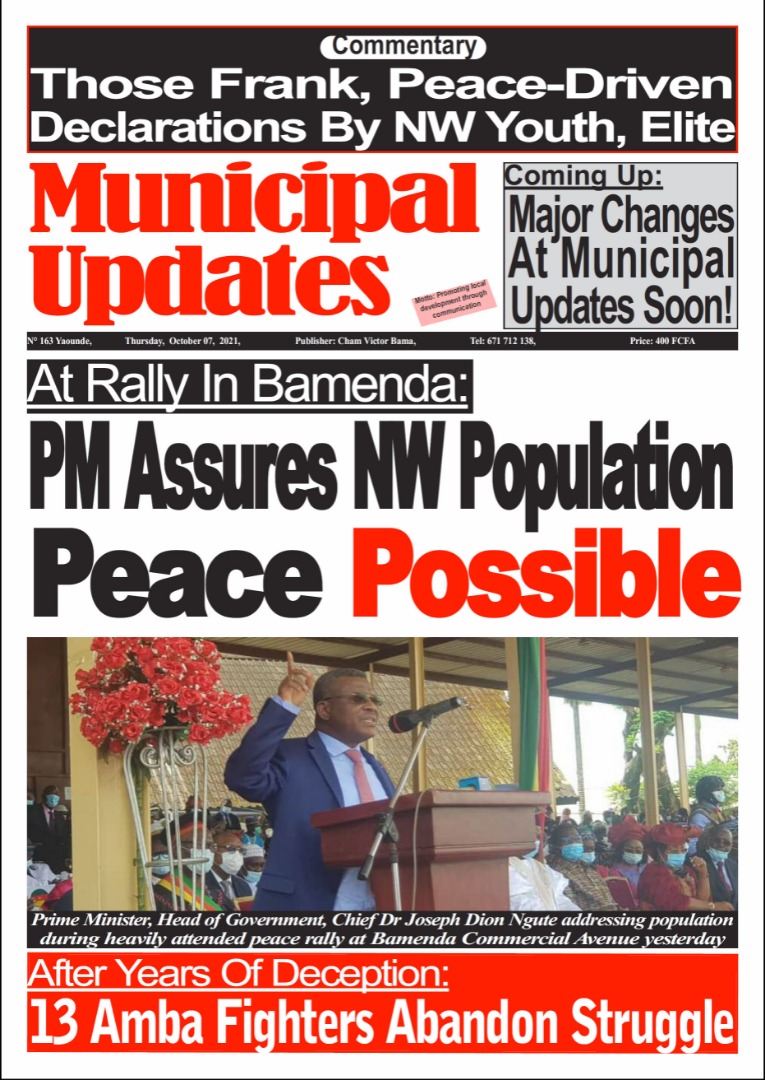 Looking at things from afar, it seems to be moving on very well. People are going about their businesses and shops are open when they can, churches are alive and active on Sundays and weekdays, some children are in the few schools that are opened.  On an ordinary day, nothing would remind you of the pain and suffering except of the many security posts mounted at every crossroad in town.  Nothing is far from the truth; the people have learned how to live with smiles in hell fire.

It seems calm and no one talks about it anymore; everything on the surface looks ok and under control, but the reality is far from it.  It is close to five good years now; no solution has been found for a true and lasting peace.  The recent lockdown called by the Ambazonian fighters which lasted three weeks and was highly respected by the people is a clear sign to testify that nothing has changed for those involved in the conflict.  The only change is that our children have learned to go about their business immediately after a shoot-out as if nothing happened, to jump over dead bodies of their brothers and sisters as if it was a street dog knocked down by a car (the trauma is unimaginable).  It is no longer news to hear of gunshots, killings, arrest, kidnaps, harassment, ransoms, homes on fire etc.  Recently, the government made a cosmetic attempt at peace by sending the Prime Minister to the Anglophone regions for supposed peace talks. In Bamenda, this visit was met with gunshots and retaliation from the Ambazonian fighters.

The very sad part in all this is the fact that it seems no one cares about the real problem but everyone talks about the complication of the consequences of the fight. Why are they fighting in the first place is what our leaders have been avoiding for the past five year.  When I look around, it is clear that the interventions so far from NGOs, Churches, and international organizations like UN, AU etc have not been only insufficient but superficial!

Sad!  It is sad that the ultimate human right, the first and most important: the right to life hasn’t been the major concern of these groups providing some interventions. Shame! They want to provide food to people who are not safe, education to people who can’t eat.  Why is the world so unfair, why can’t we treat first things first?

How can we talk about reconstruction when there is no truth, justice, and peace?  What a disgrace for any leader, (religious or civil) who thinks we can just burry the pain and hurt and start reconstructing as if nothing happened.  It is disgusting that some religious leaders are living in such a fantasy.  What has become of the prophetic ministry we received from Christ through baptism to denounce evil, proclaim the truth and be ready to die for the truth?

Disappointing to see the UN and AU play the role of a wicked elder brother who takes pleasure in seeing his siblings fight and kill each other.  Worst still in this case he is the source of the problem and has the solution, but he has decided to be mute.  This hypocrisy in the guise of diplomacy is sickening.

Maybe this struggle has become red gold or blood diamond.  It seems we lost it all as a people and as a faith community.  Like the psalmist would say “I lift up my eyes to the mountain, from where shall come my help?”

We can only run back to God with the hope that He will touch the hearts of our leaders who have placed their personal interest ahead of human life and dignity.  The faith community has a bigger challenge to educate and re-educate their many faithful who have lost the sense of the dignity of life and faith in the divine.