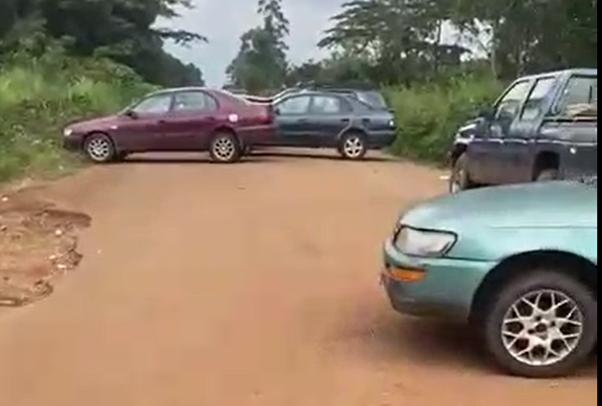 After the Amba Boys (Separatist Resistance Group) killed five police officers in Bali the S.D.O. (Senior District Officer) of Mezam Division where Bali is situated, gave an order that no motorcycles (known as ‘bend-skin’) may be used in Bali Nkonga Sub- Division on the roads to Mamfe, Nigeria and Kumba. Many people travel along these roads. The order given is for a duration of three months, and could be extended

In reaction to this the “Amba Boys” blocked roads to Bali, Mamfe, Nigeria, Kumbo, Bambui, Fundong and Njinikom from Wednesday August 4th indefinitely to all traffic.

Their blocking of roads was done as follows:

Cars coming on these roads were ordered by the “Amba Boys” at gunpoint to park in a special way; car keys, car documents and private documents were taken by them from the drivers.

The video below shows the situation on the Bambui / Fundong road.