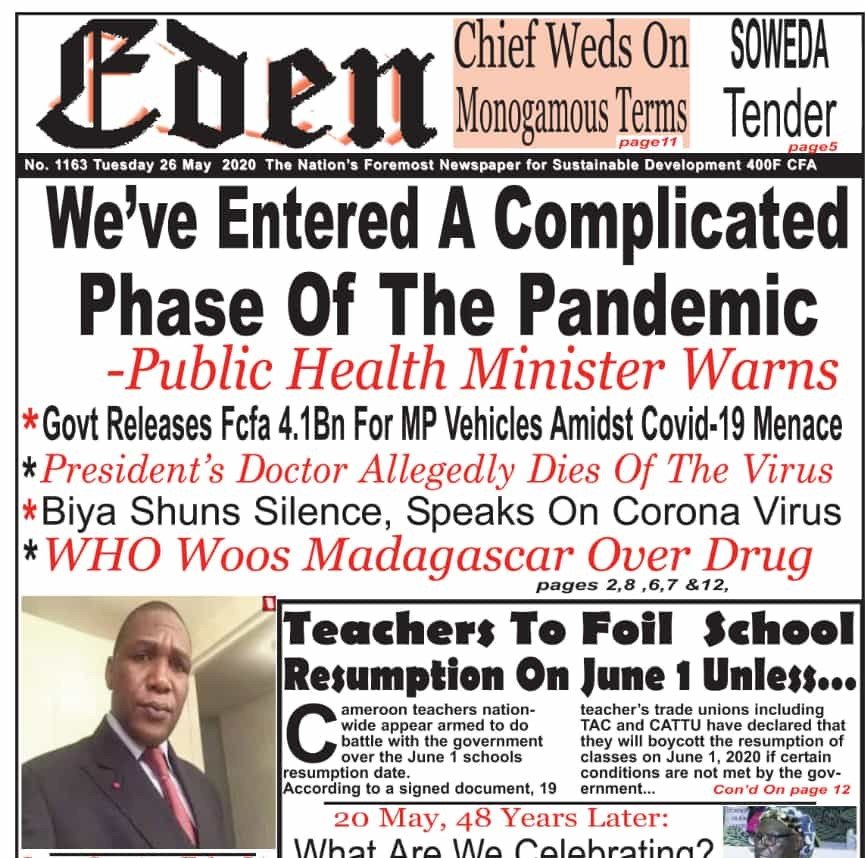 Yaoundé (Agenzia Fides) – “Although all ten regions of the Country are affected, there are very different levels of contagion, with some epicenters from which the contagions spread in the rest of Cameroon. These epicenters are the cities of Yaoundé, Douala and Bafoussam”, writes Fr. Moïse Tam Nkudé, CICM, parish priest of the parish Notre – Dame de la Paix Gadji, in the diocese of Batouri, in eastern Cameroon.

“Road transport was an important factor for the spread of the infection from the centers most affected to the rest of the Country”, said the priest, who refers to the data reported by the authorities.
“Of course, people tested positive in Cameroon as a whole do not show the real situation. It is possible that there are many more people who are infected. Health centers within the Country and regional hospitals do not have sufficient equipment or materials to carry out systematic tests”, explains Fr. Nkudé. “Already taking care of ordinary patients is problematic. Today in Cameroon apart from known, reported or detected cases, one cannot have an idea or the exact proportion of the development of Covid-19”.

Cultural factors also have a strong impact on the progression of the pandemic in the Country. “The disease often begins within the family without the patient and family members knowing about it, thus exposing themselves to contagion, like the neighbors who visit him. It is known that in Africa, and particularly in Cameroon, when someone is sick, a large number of family members, neighbors and friends visit the patient. It is an anthropological and sociological problem”, underlines Fr. Nkudé. “Once it is ascertained that the person has contracted Covid-19 disease, family members and friends are also subjected to controls, with consequent psychological crises”.

The drama is accentuated in the event of the patient’s death, because health rules prohibit the bodies of being returned to the family. The authorities proceed to the immediate burial by specialized teams. Only a few family members are allowed to attend the burial. The custom wants families to transport the deceased to the village of origin, to organize the funeral with all the risks that this entails. It is for this reason that bodies are not returned to families. Traditional body washing and dressing operations are also prohibited for health reasons.

“Clashes have occurred between families and health service personnel and law enforcement. Some families contest the death certificates issued by doctors, which attest that their loved one had contracted Covid-19. There are doctors who issue fake death certificates for a fee to allow funerals to take place”, says the priest.

Of course, economic activities are severely affected by the lockdown, especially those who work every day in the informal sector. Family violence is on the rise, as well as thefts and robberies. “In parishes the collections have dropped drastically. Appeals have been launched to help priests in difficulty”, says Fr. Nkudé who concludes by launching an appeal: may the Virgin Mary “sustain the suffering humanity, so that life triumphs over death”. (L.M.) (Agenzia Fides, 2/6/2020)