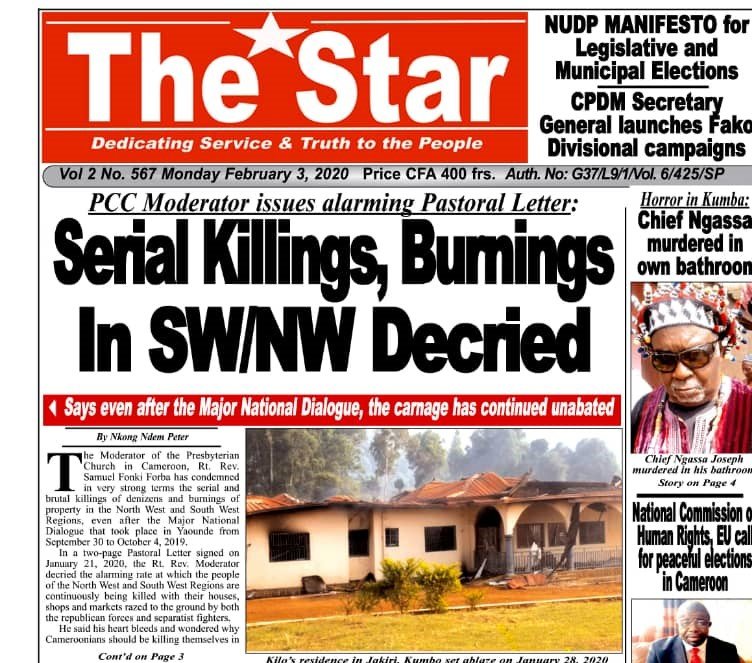 When a contingent of 500 soldiers were sent to the North West region ahead of the February 9, 2020 twin elections as peace keepers or call them protectors of persons and property, the action received much criticism as it is unheard of that troops be sent into a region only in a bid to force elections to be held. People were yet to chew on the heavy militarisation when they started striking.

One of the first villages to be descended on by the fresh troops from Yaoundé was Abuh village, a village in Fundong sub-division known to be the stronghold of ‘Ambazonian Restoration fighters. The military went down to the village on Saturday January 11, 2020 and attacked the ‘Amba Boys camp’ installed in the village, killing three armed fighters and two unarmed civilians, reports say.

“They burnt houses in the village and demolished with the help of a front head loader one beautiful house for nothing. It is true that the Amba Boys are in this village but they should also know that there are innocent civilians in the village who cannot abandon their houses and families to run away. When the military comes to fight the Boys Ü1C7 should fight just them and go. They should not burn our houses” Nawain Njang, a woman of about 55 who had her house along the road burnt, told The SUN

The SUN also spoke to people in Ngwah village, a village that is also known to be a stronghold of ’Ambazoman fighters’ in Boyo Division and Fundong in particular. “We were sleeping when we heard them passing and before we noticed there were heavy gunshots and houses being set on fire. They burnt most of the houses along the road as they passed to Abuh”, one inhabitant recounted.

It is worth noting that this is the second time the military is descending on this area and burning houses along the road. More people have been displaced from the village to other areas out of Fundong and within Fundong sub-division. “This act has forced the blocking of roads leading to Fundong within the last week thereby forcing people who wish to travel to and from Njinikom and Fundong as well as Bclo to trek most of the way and through shortcuts on bikes and at very high cost.

In Bafut on Monday. January I3, 2020, the military also clashed with the ’Amba Boys’ there, causing casualties on both sides and chasing the whole town into the bush.

The recent and most horrible was the Bali situation that saw more than 25 houses set ablaze with more than seven (7) persons reported dead. The one that caught the attention of many was a certain Charles, apparently in his late thirties who was killed and then burnt in a house.

Report on Current These attacks by the military have increased since the installation of General’ Nkah Valère as the commander of the 5th joint military region. In a sitting with the press, he warned the Amba Boys, telling them that the military know where they are and that if they do not drop their arms and stop the hostilities, the military will come for them. It would appear be is a no-nonsense man who keeps to his word. Fighting has intensified in most ’hot zones’ in the North West region since the start of the year.