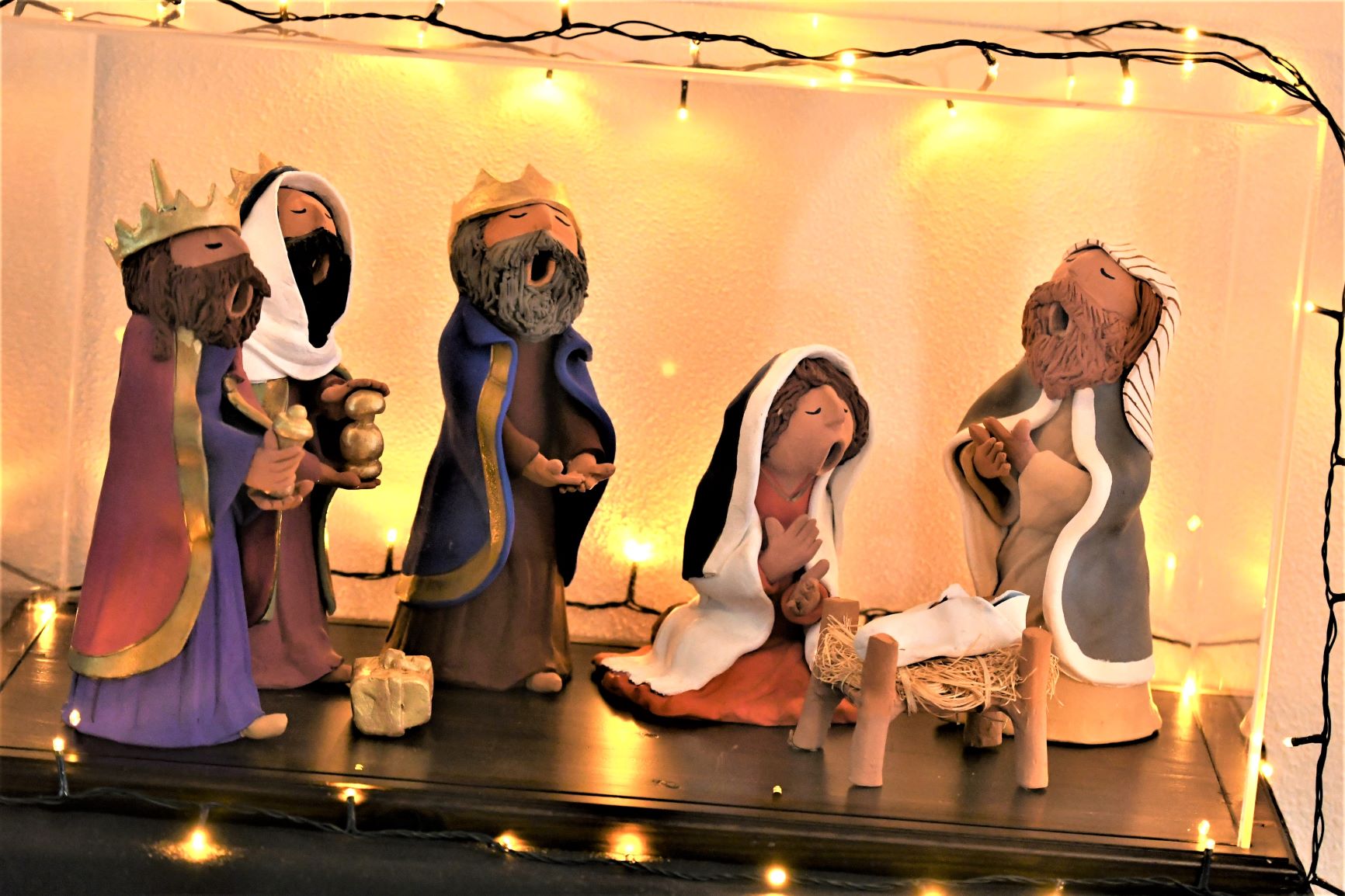 The Mill Hill Missionaries wish all visitors to this website a Happy Christmas, and abundant blessings in the new year.

We live from stories and when we grow older we also love to tell stories ourselves, stories without end, about things past. And wherever you go in the world, people tell stories about how it used to be, and how the world came about. My interest in past stories took me to the great Indian tribes of southern United States, Utah, Colorado, Arizona, and New Mexico. The Indians of the Anasazi tribe once lived there in houses in the steep rock walls of the many canyons. They were the original inhabitants and the ancestors of the Pueblo people who currently still live there.

Even in pre-historic times they were known for their pottery and artful pottery figurines. That art was later developed by the Pueblo Indians. Beautiful figurines made of clay and painted in bright colors. You see them everywhere, in the market and also in art galleries. A famous statue is the “STORYTELLER”. The Indians had no written tradition or history, and everything was passed down through stories to the next generation, from “grandmother to great-grandchild.” The “storyteller” was often a woman. She was squatting, her head slightly raised with her mouth wide open and eyes closed, and the children sitting on her thighs. She tells about what lives and has lived, about the people of the tribe and the dark past. Native American artists have further shaped this genre, and one of them, Juan Sandoval, now makes all kinds of clay sculptures of people from the past and the present. All with wide-open mouth and closed eyes.

All “storytellers”. They all have something to tell

While walking around Albuquerque, New Mexico, my eye fell on a Christmas group created by Juan Sandoval. Sculptures made from clay and fired, painted in bright colors, each with its own body language, with large hands, raised head, wide-open mouth, and closed eyes. Everyone in that group was a “storyteller” in their own way. They were quietly waiting on a shelf in a shop. Saint Joseph even had a price tag around his neck. “A bit on the expensive side” I thought, but I loved it. They radiated something, had something to say, something important to share with us, something they had seen, experienced in their innermost being. Joseph, Mary, and the child in the hay, three kings … My mouth also opened in amazement and I had to laugh quietly and share in their deep joy. They spoke a language that I understood:

“Rejoice and tell everyone

today a child is born for us

a savior given to us”.

So innocent, almost childlike, simple, humble and spontaneous, and they all radiated deep joy, and it seemed as if they were singing together in chorus … the story of a God made man in Jesus, in us!

That Christmas group is no longer on that shelf in that little shop in Albuquerque, New Mexico. Joseph and Mary and the child, along with the three kings, traveled with me – although wrapped in thick layers of bubble wrap – and are now in St Jozefhuis of the Mill Hill Missionaries in Oosterbeek, The Netherlands. Not as works of art, but as witnesses to what people have experienced and still experience, here and now and everywhere. They tell “the greatest story ever told”.

Pastor Nico ter Linden has written a beautiful book entitled: “The story goes ….”. Mind you, those dots … are the most important! Those dots mean that the story continues. It’s not just about times gone by, but about me and you, here and now. Something is said that lives among us and in us.

The Christmas gospel is and remains a story – just as Indians have their stories – about the mysteries of life. But in the beautiful story of Jesus’ birth there is good news.

We are told that Jesus is a divine message to each of us. He who would later say that he is one with the Father made us all aware of our own birth. That we all already carry the divine within us. God’s presence ….

And that we are called to complete our birth.

That makes you think!

Actually, I should now stand next to that Christmas group also as a “storyteller”

that God is incarnate in each of us.

The story goes that Christmas is also NOW.