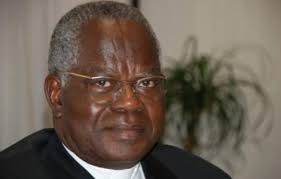 The influential Archbishop Emeritus of Kinshasa, Laurent Monsengwo Pasinya, a critical voice of successive regimes in the Democratic Republic of the Congo, died Sunday near Paris at the age of 81, after having long played a leading political role.

Bishop Monsengwo was evacuated Monday in France “in critical condition», According to his diocese, for appropriate care. The causes of his death have not been specified.

Cardinal Fridolin Ambongo, Archbishop of Kinshasa, «has the deep sorrow to announce to the Catholic Christian community and to all people of good will the death of Cardinal Laurent Monsengwo, this Sunday, July 11 in France (Versailles)“, The archdiocese said in a statement.

The bishops of France for their part greeted “a great figure of the Congolese Church». «A man of peace, he tirelessly committed himself to dialogue and reconciliation in his country. A man of determination and courage, he denounced, without concession, the excesses and political compromises he witnessed.“, They wrote in a statement.