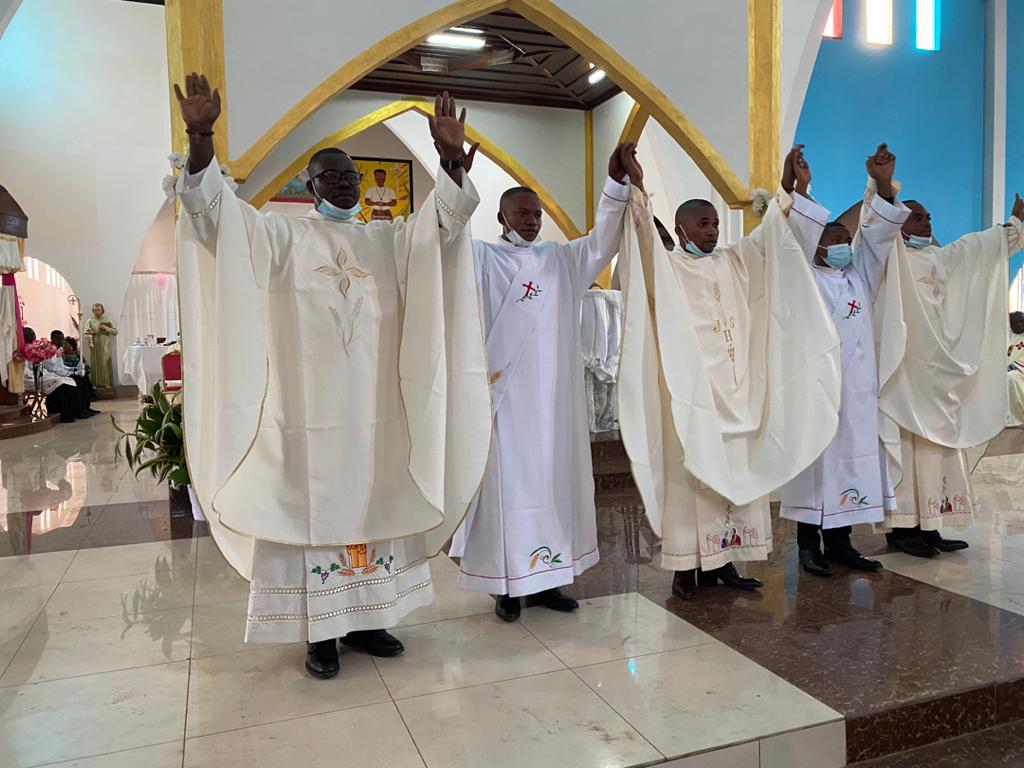 On the 18th of July, 2021, many Christians of the Diocese of Basankusu witnessed and celebrated a happy event: the ordination of our confrère Guylain Agbasoa MHM. The ordination took place at Sts. Peter and Paul Cathedral Parish, Basankusu.  Guylain was ordained along with two diocesan deacons who became priests and two seminarians who were ordained deacons. Initially, our brothers were supposed to be ordained by Bishop Joseph Mokobe Ndjoku, the Bishop of Basankusu Diocese. However, due to illness, he delegated the Bishop of Lisala, Joseph Bernard Likolo, who is a native of Basankusu Diocese.

In attendance were more than eight thousand faithful. In his homily Bishop Joseph Bernard Likolo emphasized the need of being true witnesses and servants. We should not be priests who are just good in talking or showing off, who will encourage other people to be faithful to the Word of God, to act as prophets and real missionaries, and be close to each other, but do not practice this themselves. We should be real priests, not just priests for the sake of being priests. In other words, the bishop discouraged us from being priests just by name and not living the Sacrament of Priesthood. We should be real witnesses, not priests who will be complaining about others and the world, but the priests who are ready to look at themselves and how best they can serve God and his people. During the time for the speeches, Fr Stan Bondoko MHM encouraged us to live our Motto, to Love and to Serve, which is our identity, our raison d‵être and our motivation.

After Mass, we continued with other celebrations, where many people presented different sketches and traditional dances. The following day, we had a recollection as the members of the Mill Hill Missionaries which ended with a Mass in English celebrated by the newly ordained, Guylain Agbasoa. After the Mass we immediately went to grave of late Otto Bambokela for prayers, before the meal.  On the 21st July, 2021 the family organized a celebration for Guylain at the Mill Hill House. His first Mass in his home village will be on the 1st August, 2021.