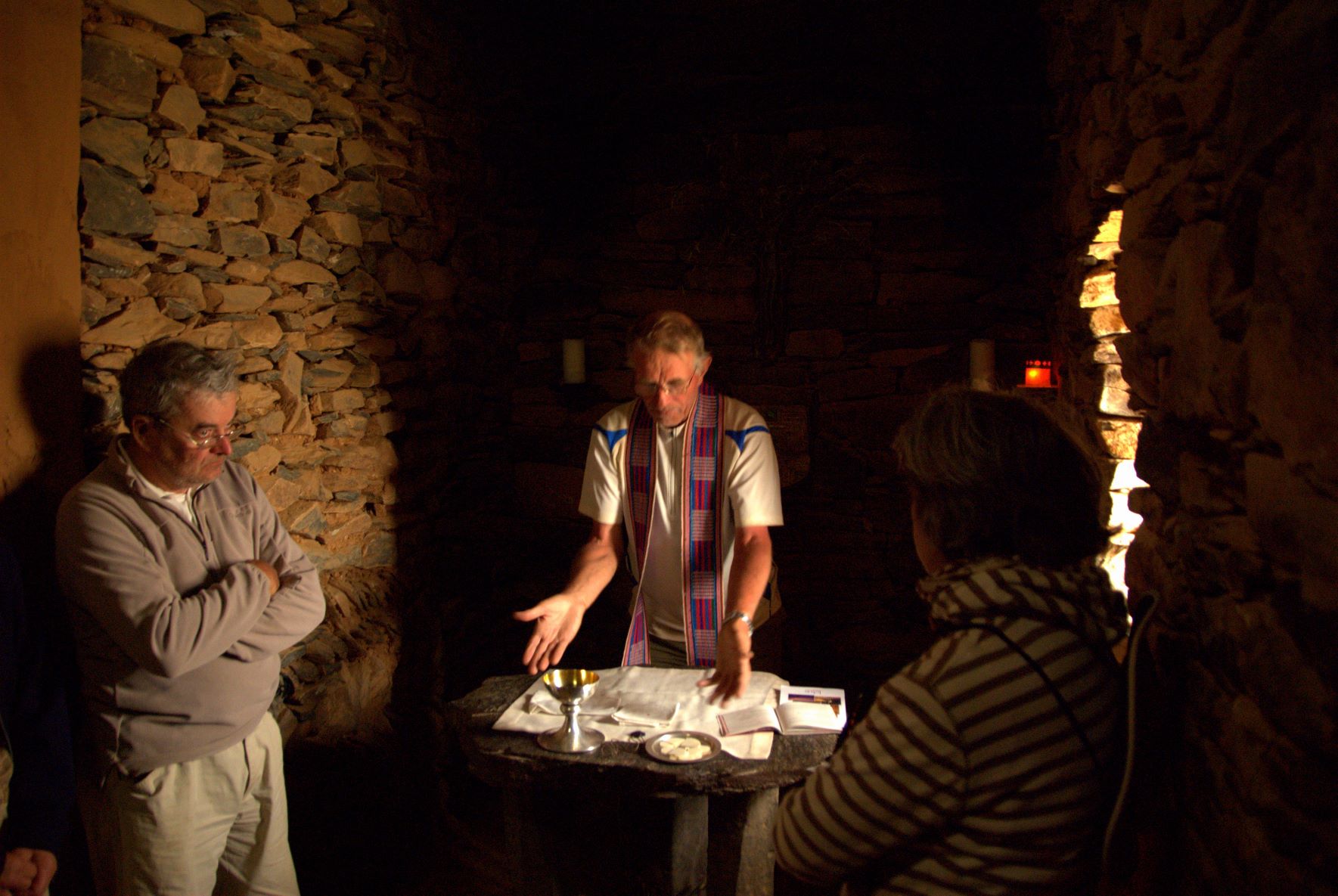 The Dutch Missionary Organisation ‘People with a Mission’/AMA recently asked me for an interview to be published in a promotional brochure. Here it is in translation.

MISSION IS STILL VERY MUCH ALIVE

In conversation with Fons Eppink mhm

After many years in the mission and in administrative positions, Fons Eppink was a member of the AMA committee from the end of 2010 to 2014, the last period as chairman. We speak to Fons in the St. Jozefhuis of Mill Hill in Oosterbeek. “Hospitality, being open to the stranger and the strange: that is the essence of mission”

Your own missionary history largely coincides with that of AMA (Dutch Missionary Organisation). What does your missionary past look like?

“I worked for seventeen years in the rainforest in the northwest of Congo, in the diocese of Basankusu. It is still one of the most backward regions of the country. I was there for the first time in 1968, then from 1973. After that I worked for another five years in Uganda in training, and five years in Kenya. After Congo, I spent 12 years on the Mill Hill General Council, with special responsibility for colleagues working in Africa. In addition, I have traveled extensively to all countries where Mill Hill is active, also outside Africa.”

How would you characterize that period?

“It was the period in the mission of the young churches that started to stand on their own two feet. AMA has always invested heavily in and contributed to this. I was able to see that with my own eyes in Congo, in a very beautiful way. We received our first local bishop there in 1975, Matondo kwa Nzambi. He was totally committed to what they call ‘inculturation’: a church with an African face. He often quoted Cardinal Malula, who once very characteristically remarked, “A baby is going to be born here. We don’t know what it will look like yet, but one thing is certain: that baby will be black.’ By that he meant a church rooted in African culture.”

How did it go after that?

“I left Congo in 1988 when I was asked to join the General Coumcil. I found that very difficult in the beginning, but in the end it was a fantastic time. A colleague of mine once called it a kind of contemporary Acts of the Apostles, and I recognized that. To engage in deep conversations with colleagues in all those different contexts about their own approach, experience and spirituality. I found that very touching. It was also quite emotional to see the differences. My first visit from the head office was to Western Cameroon. There I saw a form of development that I did not know at all from Congo. Just an African country, not perfect, but a hundred times better than what I knew from Congo. That hurt. Why was it possible there, and not with ‘us’? All those people I loved so much, but who had so few opportunities. I wanted and still want the best for them.”

How do you view the current mission?

“Many people think that mission is over, but of course, it is still very much alive. Just not as a one-way street from Europe. It was and is a privilege to have seen so many young African confreres blossom in mission. I noticed that those youngsters really soaked up the missionary spirit. It has become part of them. By that I mean: being concerned with people and also being willing to live very simply. And adapt to the local culture. I remember a visit to Malaysia. There I found a former student of mine from Kenya; a very smart fellow. He worked there in a mixed Iban-Chinese parish and after three years he not only spoke Iban perfectly but was also able to preach in Chinese! The local Archbishop was so impressed that he said to me, ‘Those guys fit so well here, send us more!’”

How would you describe the missionary spirit?

“For me, that means standing among people and seeing what happens, what is needed. Not coming up with a preconceived plan and then rolling it out locally. Our Matthew Haumann mhm once said it very beautifully: “mission in Africa for me means to sit under a tree and let God happen”. The role of missionaries is to be close to people and, inspired by the Gospel, to take small steps together, to be there for the long haul. A matter of perseverance, even when it all seems hopeless. I think that has been a great contribution of missionaries. Even though they are sometimes put in a bad light, they stayed put. I have always found it very inspiring to be slowly introduced to a different way of life and thinking, and to gradually discover more of it, of what is really going on there at a deeper level. People gradually open up more and express what moves them deeply. Also, about magic and the spirit world. I think that is the deepest aspect of the African soul: the contact with the ancestors and spirits. At the same time, it is furthest away from us (Europeans).”

You came back to the Netherlands in 2010, and you quickly became a member of the AMA committee. How was that for you?

“I recognized a lot of the missionary spirit at AMA, that was of vital importance to me. I had become regional superior of Mill Hill in Oosterbeek, but I had spent a large part of my life in Africa. Mission becomes your marrow and bone, so to speak. AMA was for me a window on the mission of today, what is going on with the people who are working in mission now. I loved hearing all the stories about your visits to all those different countries. And to help think about the big Commission. There have been so many Dutch missionaries, men and women in the past; how will that continue now? What are we passing on? It’s all different now, a different scale, but that doesn’t really matter. It is about the spirit: how you pass on the missionary fire, especially to laypersons. I have always recognized that enthusiasm and solidarity across borders in the people of AMA – the openness, the dialogue with the other, other cultures, other religions. And the involvement with people who are really on the margin, who are having a hard time and who are lagging behind. What I really liked about AMA from the start was the dialogue. Talking to people, no matter how different they are. Working with local partners was relatively new to me, but I really liked that. That those local partners also regularly come to visit here and join the discussion and enrich the thinking. It’s no longer a one-way street.”

At ‘People with a Mission’ and AMA we have many conversations about the future. Mission is perhaps more topical than ever. Worldwide you see that people are having second thoughts about the idea of ​​‘makeability’, of large structures and all-encompassing solutions. There will be more room for local voices, people’s own input, the wisdom of original cultures, based on local possibilities. All very missionary really. How do you view that?

“I think that’s a very exciting development. In that context, the corona pandemic has also been a form of social shock therapy – a kind of crash course in solidarity, common well-being (bonum commune) and what really matters – for example which professions are essential. The growing appreciation for the small-scale, with attention to local input, and appreciation for local knowledge is also completely in line with the basic missionary attitude.”

What role do you see for religious in the Netherlands in this regard?

“The place of religious is not at the center of the church, nor in places of power, in government or management, in places where existing structures are maintained and kept in place. In the ecclesiastical tradition, religious are always closer to the periphery, to let a prophetic voice be heard from the Gospel, to show radical solidarity and to explore new paths. This role is vital, especially in this time of dramatic decline in the number of religious and continuing aging of the population. Pope Francis has given a whole new missionary impulse to the universal Church (his encyclical The Joy of the Gospel). It is in the first place for religious in the Netherlands to be a living model of evangelical joy and enthusiasm. That can be done in many ways. I also see it as an important task of religious to protect the Dutch ecclesiastical province from self-centeredness, navel-gazing, becoming a small club of purists in doctrine. Hospitality, being open to the stranger and the strange, also to the universal church: that is the essence of mission.”