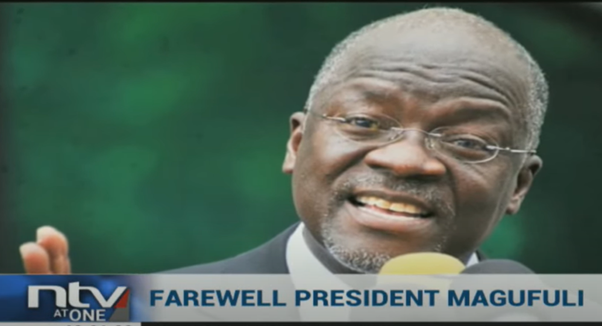 THE ‘BULLDOZER’ PRESIDENT PASSES ON.

On Thursday 18th   March 2021, a day before the solemnity of St. Joseph, the Tanzanians woke up to the news that President John Pombe Joseph Magufuli had passed on the evening before. The announcement had been done in the late hours of the night by the then Vice President Samia Suluhu Hassan. She said the president died of heart disease, a condition he had been suffering since 2006.

Being here in Tanzania, has given me a chance to witness to how people loved the president. He may not be a darling to the international community or maybe to the elite class of the country, but to the common man here, the loss is unbearable.

I am not in a position to talk about president Magufuli but I only share an observation. People in churches, markets and public places have a positive picture of the late president. Here at the sabbatical programme in Arusha, we have 6 Tanzanians whom you could see were affected by the sad news in a very personal way. Practically all who were interviewed on the streets of major towns did not hesitate to say he was their president and they will miss him.

The good things they attribute to him include improvement of roads, fighting corruption, bringing services to the people, simplicity in his interactions, being a God fearing man and others. The president had his own motto, “kazi tu” meaning we have to work. In one interview, a man referring to his presidency said, ‘This has been the only time I went to government offices and received services, I don’t know if it will be so again.’ As far as church going is concerned, he joined worshippers in the nearby Catholic Church for Sunday worship and addressed them after. This later became the obvious sign that the president had been out of public view for some time.

His critics on the other hand say he was not a good president as he silenced the media killing freedom of expression. Actually for the almost 3 weeks the president was not seen in public, no Tanzanian media ever raised any concern. He didn’t tolerate opposition and as we talk now, the opposition leader Mr. Tundu Lisu is in exile in Canada. They say during his presidency, the unemployment level has risen. He was a dictator and finally he didn’t take the Covid scare seriously hence exposing his people to the danger of the pandemic of which they now say he has become a victim. These are claims that no one has confirmed. But it is assumed that following the immediate events leading to his death, it is likely to be Covid related.

One thing is clear. Magufuli will be remembered by his people. He will be laid to rest this week on 26th March 2021. This is after the county-wide viewing of his remains that will take place in four major cities of the country. The vice president as expected was sworn in on 19th March 2021 early morning hours becoming the first woman president of the country and the 6th president of Tanzania. One of the Swahili newspapers in Kenya had the headline “Tanzania yapata Suluhu.” This is a Swahili for ‘Tanzania now has a solution.’ Suluhu being the name of the new president as well as Swahili for ‘Solution’. We are not sure what solution the country needs but many are likely to lean towards the ongoing war on Covid. As the director of WHO expressed in his congratulatory message.

Rest in peace Bwana President. You did your part, may we do our own part.