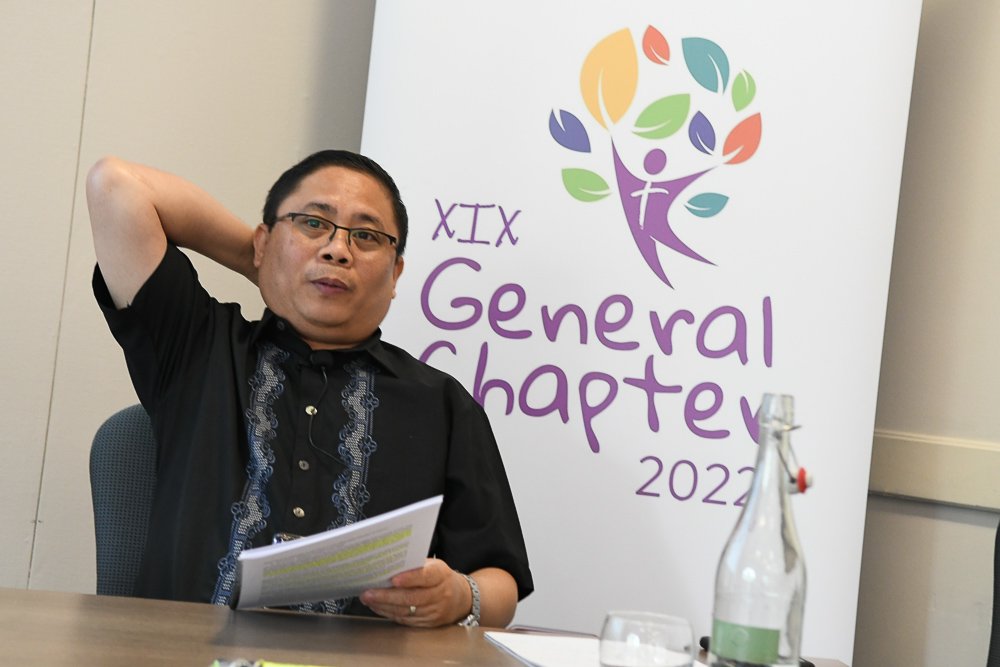 What follow is an extract from the report of the General Councillor for Asia, Jimmy Lindero, to the General Chapter

Asia is undergoing a dynamic economic development. China, Japan, Taiwan, South Korea, Singapore, Thailand, and India represent new economic centres. There is great technological change. Yet most people are still struggling for survival. The majority of the population live in dire poverty. Local economies are caught up in the global economy, which exercises excessive and aggressive trade exchanges, sucking out much of Asia’s assets. There is much dependence, exploitation of cheap labour, destruction of resources and environment, unfair price trade, illiteracy, problems connected with migrant labour, exploitation of women, child labour, landlessness, problems of peasant farmers, poor working conditions, inadequate salaries, unemployment, and underemployment. All these lead to mass poverty.

This situation is further aggravated by authoritarian and oppressive political regimes. Many Asian countries are governed by dictatorial, military, or theocratic regimes, marked by a denial of human and civil rights, political murder, and the curtailing of freedom of expression and of the press. There is an underground world of vice, drugs, and arms trade. Democracy in many Asian countries is only nominal.

Such complex situations make it very difficult to live the values of the Kingdom. However, there are signs of hope in a growing awareness about, and concern for, social questions. There is commitment to remove illiteracy, improve health care, and prepare people for self-reliance.

Major Pastoral Challenges to the Family in Asia (FABC 2016, Colombo, an extract)

The variety of races, ethnicities, and cultures in Asia should be a great source of pride and joy. They are a rich mosaic of the human tapestry that God our Creator has gifted Asia. But harmony and peace do not always reign. Violent clashes of culture and ethnicity, often with religious and political overtones, dot the Asian landscape. In some parts of South Asia and Southeast Asia, Christian families have fled their homes for safety, literally driven away by religious bigots and radicals. Families have been massacred. Churches have been razed to the ground. Christians live in fear, in anxiety and insecurity, under the sword of anti-Christian laws that do not welcome religious pluralism. Numerous are the cases of abducted Christian girls, forcibly converted and forced into marriage. And sadly, we see an increasing level of aggressive and militant religious intolerance in many Asian countries.

While there are certainly regional economic differences – note for instance the level of economic development in the East Asian region, as well as in Singapore and Malaysia – pervasive and massive poverty is the condition of millions of families in South Asia and Southeast Asia. The evils of human trafficking, the lure of the sex industry for children, youth and adults, the willingness of many to be involved in child pornography are mainly due to poverty and deprivation.

The negative effects of economic globalization on poor families that cannot compete fairly against the rich and more powerful in a regime of free liberalized markets cannot be overestimated. Unable to access the sources and benefits of economic development that flow directly to the upper levels of Asian societies, poor families are of necessity drawn to seek a better future in urbanized centres in their own countries or serve as migrant workers in more developed countries as in Singapore and Malaysia and in the East Asian region, and especially in the Middle East and in Europe.

Such internal and external migration of family members is often to the social detriment of the families left behind. Conjugal bonds and family relationships are broken by prolonged absences. Children grow up without the guidance of both parents. Love cannot be expressed merely by remittances sent to support families. Moreover, many migrant workers suffer inhumane treatment, and the phenomenon has been called a “new slavery”. Their dislocation often results in the breakdown of families and the dysfunctional growth and development of children.

Of enormous implications is the situation of families affected by internal armed conflicts, such as wars, political rebellions, terrorism and violent cultural, ethnic, and religious clashes. Such violence and conflicts result in temporary or permanent dislocation, internal and external migration of thousands of families to safer areas, regions or countries. We now have the growing phenomenon of political, economic, cultural, climatic, and religious refugees in various Asian countries – a phenomenon that has stirred international concern. The phenomenon of Asian refugees exacerbates biases and prejudices that are constant sources of division and conflict. The most affected victims of conflict and war are children, traumatized by evacuations, and the roar of weapons. They grow up as “children of war”, their growth and development and their formal education seriously interrupted. Many are even recruited forcibly as “child soldiers”.

In the wake of economic globalization, a secular, materialist and relativist postmodern spirit is insidiously creeping into the Asian psyche. It runs counter to treasured Asian traditional values of the family. Its emerging dominance is a form of ideological colonialism, whereby the values of secular

Ideological colonialism has introduced “a culture of the ephemeral”. New forms of love relationships and new forms of families alien to the Asian ethos, such as same sex unions, are developing. The new cultural ideology devalues marriage and life-long commitments. It promotes instead the practice of co-habitation, transitory love and passing commitments.

Further, in the internet lurk many dangers to impressionable minds with regard to human sexuality, such as pornography and the commercialization of the body.

On the other hand is the challenge from within cultures, such as the discrimination against and exploitation of women in some extremely patriarchal Asian societies. The thousands of female fetuses aborted yearly and the practice of girl-brides indicate the extent of women’s subservient situation as well as a low attitude towards marriage.

The effects of natural disasters and extreme weather changes resulting from global warming and climate change on Asian families are enormous. Asia is experiencing as never before stronger and more frequent typhoons, floods, land erosion, more severe droughts, prolonged El Niño and La Niña effects. These bring about the destruction of farm crops and the loss of livelihood. They dislocate thousands of families who are driven to look for a better environment for themselves and their children. They drive thousands of Asian families into deeper poverty and deprivation. They are the new “climate change refugees”.

Asian families experience serious tensions from within that threaten the relationships between spouses themselves as well as among the members of the family. The environment of love is commonly broken by domestic violence that sometimes ends up in the hands of police. Children cower in fear and anxiety as their parents do violence on each other not only by words but also by action. The inadequacy of decent housing among poor families, especially among urban poor, is a health and sanitation hazard. The lack of privacy is also a strong temptation to sexual crimes within the family. Undoubtedly, even though subtly, the gay or lesbian orientation of a member of the family leads sometimes to a silent discomfort and alienation. In some countries, the dowry system becomes a source of great tension at the very beginning of marriage. The harsh treatment of domestic workers is not uncommon.

The creeping emergent global culture of secularism negatively impacts cherished Asian family values. It weakens religious faith, as it has already done in many developed countries in the northern hemisphere. In some countries, the drive for higher standards of living results in less respect for the elderly and the disabled as they are considered burdens to the family. Consumerism replaces Gospel values of simplicity and responsible stewardship of created goods. In the language of Pope Francis, we are seeing the emergence of a “throw away” culture.

We recognize the positive contributions of the digital revolution to family and social life. But the digital revolution is ambivalent. Together with lights there are shadows. For we perceive the weakening of family bonds in this digital age. It is not unusual to see members of the same family gather, but each one busy with the mobile phone, texting messages to friends. In the past, the family would gather and watch TV together. Now, mobile phones and iPads have replaced the TV. The sense of family togetherness is gradually being eroded. Moreover, individualism, a fundamental attribute of the postmodern spirit, is luring the youth away from the family. With this is a gradual reduction of a sense of the family as sacred space of intimacy and love. As family bonds and family support weaken, young people today with even greater frequency than before find love and intimacy among peers and thus result in more teenage pregnancies.

We also observe that families do not have an adequate faith formation. Nor do they have the training to transmit their faith to others or exercise their faith in social engagement. Adult faith formation is lacking, making Catholic families vulnerable to the attraction of mushrooming religious sects. Given the religious and cultural pluralism of Asia, there is a great percentage of interfaith marriages, often to the detriment of the Catholic party.

It is in the above context that Mill Hill works in Asia. We are present in 5 countries – India, Pakistan, Malaysia, Philippines, and Cambodia. Currently, there are 67 Mill Hillers residents in these 5 countries who are engaged in the following mission priorities: