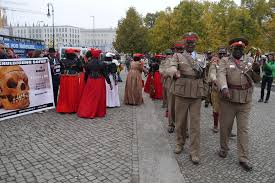 Today many Germans are not even aware that their country once ruled colonies in Africa, Oceania and China. Such public amnesia about Germany’s colonial past does not imply only a lack of knowledge. Rather it manifests in the refusal to acknowledge the practice of German colonialism and countenance the consequences.

A prominent case is the genocide of 1904-1908 in then South West Africa. Germany admitted the fact in 2015. But bilateral negotiations with Namibia have not yet reached any result.