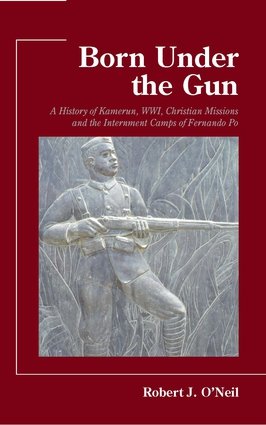 Distinguished French historian, René Pellisier, wrote what is a very positive review of Fr Robert O’Neil mhm’s book ‘Born under the Gun’ for a university journal in Portugal last year. It not only speaks well of the book on Fernando Po but also of the effort Fr O’Neil has made to write from the perspective of Africans over many years.

When I read what an accomplished historian he is I was humbled by his words, and grateful because there may be more to come from all my research. It gives a voice to all those many people who spoke to me in interviews over many years in Cameroon.

Robert J. O’Neil’s book, Born Under the Gun, is published by a company that appears to be dedicated to religious literature, which is not always a guarantee of excellence in general for the topics we are interested in in this column.

As a result, we were pleasantly surprised by its author, who is an American Catholic priest, and an ex-missionary in British Cameroon. In the United States, he addresses an audience interested in religious topics, but supposedly unaware of anything about African history. Faced with this reality, O’Neil uses a free ranging informative approach to provide his readers with a wealth of data: 1st: On the societies and congregations that evangelized before, during and after, the German colonization of Cameroon; 2nd: On this colonization from 1884 tol914; 3rd: On the conquest of the country by the Allies from 1914 to 1916, before defeat and the final exodus of German civilians, colonial troops and their most faithful African assistants. All this already represents 70 extremely detailed pages, before we discuss the main course, namely the internment of these tens of thousands of refugees by the (neutral) Spaniards of Rio Muni and Fernando Po or Poo. This justifies the appearance of the book in our presentation here.

Thanks to O’Neil we learn how the German soldiers organized on Fernando Poo their 5000-6000 askaris, their families and the thousands of Cameroonians who followed them, convinced as they were that Germany would recover its colonies.

Veritable German sores in a Spanish colony, these island camps are described as nurseries for unarmed soldiers being prepared for future revenge. And we finally understand why this somewhat obscure episode and of only secondary importance was of interest for a religious publisher: not only did the Germans keep their African soldiers under strict discipline, but a handful of German Catholic missionaries also found old flocks in their camps, (from areas where they had worked in Kamerun). They therefore created in their camps ready converts, some of whom would become catechists, who, upon their return to Cameroon in 1919, would dramatically increase conversions to Catholicism, much more massively than had been done by the earlier white missionaries, from 1884 to 1914.

Reading the text is sometimes difficult, but let us acknowledge that our author, who “mocks” postcolonial “fashionable” Africanism, has made a gigantic effort to find descendants of those African “expatriates” who explain to him the rise of German evangelization in an Iberian colony, all under the eye of the British. A new Christianity was born “under arms” and in a strange land! Not very ordinary, indeed.