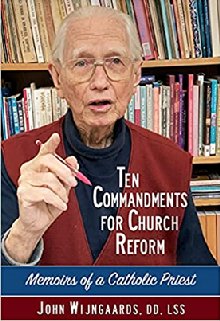 On hearing about Hans Wijngaards’  new book, ‘Ten Commandments for Church Reform’, I immediately ordered it and,  on receiving it, I could hardly put it down  ( I love to read autobiographies! ) and  I was so grateful and  delighted to read his personal  memoirs  from his early life to the present day and especially  his own account of  his amazing  loving service as an active MHM evangelizer in so many creative ways, not to mention his  years as professor of S. Scripture in St. John’s Major Seminary in Hyderabad, India, for which many seminarians who became  priests were deeply grateful.  But his expertise and services  extended well beyond the walls of the seminary. His  scholarly and very practical books  have helped me in my pastoral and Formation ministries. I have gratefully  learnt more from reading  this latest book of his.

I thank God for Hans’  graced-life and his priestly and theological  contribution to the Church, our missionary Society and so many  people through his varied  creative  initiatives. What amazing energy he has always had! He is  like a  vine that produces  the best fruit when it grows in the most challenging soil! His roots were such for, (something I did not know),  his early years were spent struggling as a POW in Indonesia.  I have benefited from his  other books and videos, shared many of his  convictions and  I thank God that he  had  the courage, after prayerful  discernment ( which I witnessed when  I was a member of the General Council at that time) to follow the Voice of Conscience and continue to write and speak publicly about the conclusions he had come to through  his thorough professional research as a Scriptural scholar and Theologian.  He thus had to  make the difficult decision to ask the Pope to release him from the public practice of his priesthood, even though,  as is eminently clear from this autobiography , he remains a  missionary priest  at heart and is deeply concerned about the Church he loves:  a church that is always in need of reform.

I highly recommend  this book especially to  those who may perhaps have had some questions  about what brought Hans, after 39 years of faithful priestly service, six of which were as Vicar General  of  our MHM Society, to  make a decision to apply to Rome for a dispensation from public priestly ministry. Let them  read these memoirs which may also, as I discovered as a bonus, update one’s theological  knowledge, besides encouraged  us to pray for Hans  as he continues his theological research and evangelizing ministry.