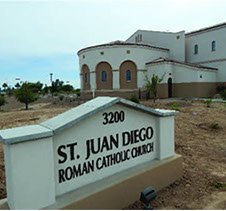 After more than a decade of researching parish life, and after teaching many cohorts of diverse pastoral ministers, something has become disturbingly clear to me: institutionalized racial and ethnic inequality, especially of the anti-Hispanic variety, is endemic in Catholic parishes.

There are statistics that bear this out. From 2011 to 2013, the National Study of Hispanic Ministry in Catholic Parishes surveyed parish and diocesan leaders across the country about parish ministries that serve Hispanics. Researchers found that, while people of Latin American origin or descent make up nearly half of the total U.S. Catholic population, only about one-quarter of U.S. Catholic parishes intentionally serve Hispanics. Among those that do serve Hispanics, more than 40 percent of parishioners are non-Hispanic whites. The structural difference is clear: white Catholics are accommodated everywhere, but Hispanic Catholics only in certain parishes.