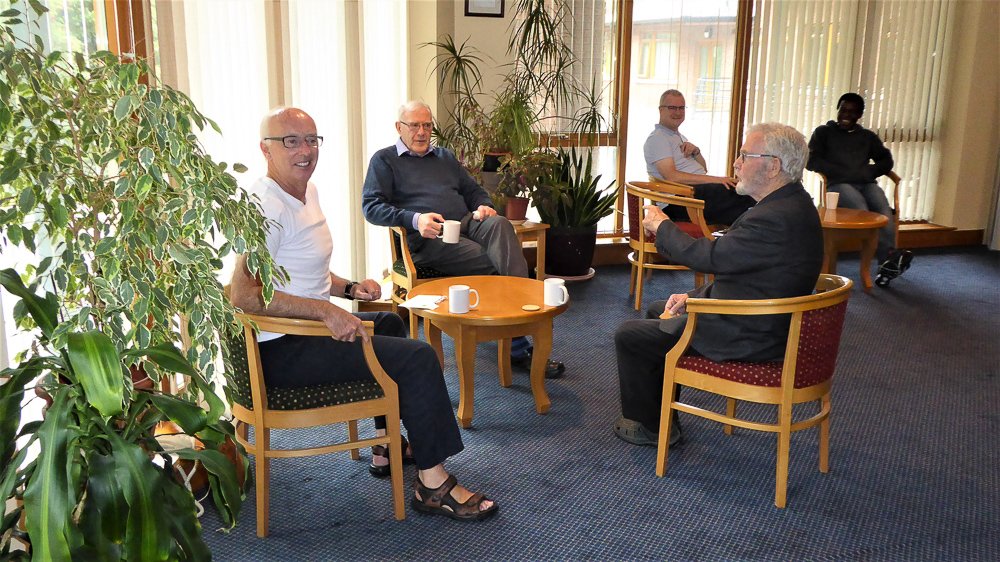 In the late afternoon of the 26th March we found out from the hospital that one of our members who had been admitted a few days previously was Covid 19 positive.  Already some members had been in isolation in their rooms from the 16th of March.  Writing tonight, some 13 members were in isolation at some stage to the end of April eight of them were to test positive, two of them died and one who had not been in isolation also tested positive when we did a mass testing. From the 26th March our lives were to change, and are continuing to be changed to the present.  As is the case elsewhere our people over here at Dartry House are also wearing thin on Covid-19 and its restrictions at times. At the same time they have tried to take it on board and discovered it is a different world when they go out to the shops.

Our neighbours and other people who attended the masses here were informed that no one could come in after the Sunday liturgy on the 15th March. Since then we had a time when few in the house went to public Mass and many prayed from their rooms, but we always had at least one public Mass a day. Now nearly all members attend one of the two weekday daily masses in the community Chapel.  From the end of March, once we were aware the virus was in the community we began to sanitise surfaces including the almost 90 chairs in the chapel. There was some reluctance by those not involved in their sanitising to remove the extra ones but those cleaning took out the extra chairs and 23 remain, sufficiently spaced out to respect distancing between people.

By the 30th March when we had our first death, we suddenly had initially three members of our house staff coming for work as some were sick and others had family members in vulnerable conditions and did not want to expose themselves to a possible risk of catching the virus here.  One other returned to work after a week or so. The four worked out a rota and remained in the kitchen only, rightly scared of catching the virus but somehow were resigned to whatever might happen and as time went on had a sense of humour about it all! They all battled on and kept us well fed and members respected their space and did not enter the kitchen when they were there.  We are so very grateful for their resilience, commitment and continuity.  Also at the end of March Sandra Neville who normally worked as our safeguarding Officer and is a trained nurse agreed to help us out due to the rapidly deteriorating situation in the house. Our resident nurse had been advised to go into isolation by the doctor due to her contact with various members who were sick. She was to become ill within a few days and though she tested negative when tests were done, she had been quite ill. We discovered the hard way that the symptoms which were initially listed internationally for the virus were not the only ones.

Without the House staff, some members volunteered and took on tasks around the house as our 10 house staff was down to four. While we have one or two members who could be part of the great unwashed, others needed laundry to be done, particularly bed linen and bathroom towels.  Many learnt quickly to wash their personal clothes with the washing machines, a number for the first time. You could see the footmarks in the dust that was gently coating the corridors in the mostly dry days of late spring as we began to shape up to the new situation.

Fairly quickly some members were doing the laundry (no ironing service though!).  People were helping to make the tea for supper, sanitise the tables and chairs in the dining room and set tables, do the wash-up in the evenings after supper, and regular washing of floors, washing and sweeping the corridors and stairs. Our members had the opportunity to use the vacuum cleaner in their own rooms too, to keep them clean as well. We began and continue  a daily sanitising of the tables and chairs in the dining and tea areas which is done after each meal, when the rest of the house staff returned they look on this task in the dining room after breakfast and lunch. Members continue the work after supper. Daily sanitising of door handles, ‘touch’ surfaces, bannisters, light switches, delivering food to those in isolation, sweeping and hoovering the chapel, keeping the garden paths swept of leaves, one wed the flower beds and it made it more pleasurable to walk the garden. So there was some activities to keep people occupied for some of the time. Some of the work was visible, but a number quietly worked in the background and did much and they are a real credit for this valuable concern and care for the community.

Some key people in the house went into isolation from early on.  We were in the middle of receiving the St. Joseph’s Novena post. The Mission organising Office was hit with the Director going into isolation. The two staff were also away due to family situations and the temporary data entry clerk had also to cease work when the lockdown came into effect.  Members helped with handling the post. Post requiring a response was answered and the computers files were updated. The Rector and not long after the vice rector who did all the shopping also went into isolation.

There had been difficulty getting quantities of food to cater for our needs as the approach here had been personalised with little though for stocking and possible absence of a shopper. There was not any real bulk shopping, enough normally for a few days at most. Shops began restricting quantities being sold to an individual to  prevent hoarding and it affected us. A mouse would have had difficulty surviving in the food larders when it just became too much for some to keep queuing and we almost ran out of food. We had one evening which was an unusually sparse meal and without sufficient bread  which showed up the seriousness of the situation. Again people stepped forward.  Some undertook shopping to get food in, and Gerald Doyle has since put in place arrangements to have bread, milk, yoghurt, vegetables and fruit delivered on a regular basis and does a “click and collect” ordering system for other food and cleaning items.  I now  smile when I hear people grumble that biscuits or something is not there at this stage. If they only knew that they might have gone really hungry for the essentials if people had not taken it in hand.