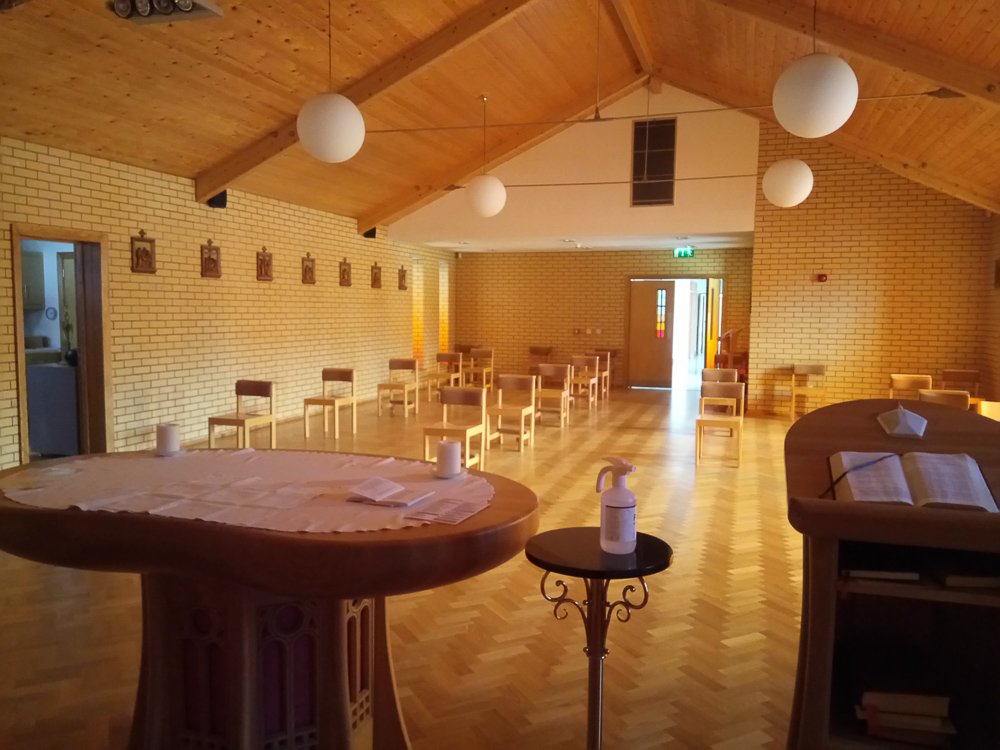 We had a number of members in isolation. Each phoned the doctor and explained their symptoms and we took the temperatures and let the doctor know if there were any of concern.  Each one in isolation required meals so three times a day trays of food were prepared and brought round to the rooms of those in isolation. A chair had been put outside the door of someone in isolation for the food tray which was placed on it and the person brought it into their room. That was easy enough but when the trays were collected plastic gloves were worn and the chair sanitised. Three were incapacitated so the tray had to be brought into their rooms so we wore masks and gloves and sanitised our hands after bringing in the tray and after collecting them.  We took risks, which we became aware of much later but so far we have lived to tell the tale and still remain negative (from the virus that is!). Sadly another member had to be hospitalised and was also to die within a week. May both of them rest in peace.

The new changes to living in the house say the dining room being changed around from four on a table to two at each end of a table. The tea area was rearranged to suitably space the chairs and coffee tables. Tape was put on the floor to show the suitable distance between people queuing for meals, the staff had to serve the food to avoid many people touching the same utensils and the Health Service Executive who have been in daily contact since April said various posters be put up for members to read and (hopefully) assimilate.  They have been very supportive and send regular consignments of personal protective equipment but we had to purchase hand sanitising fluids initially and it was initially a scarce commodity and did not come cheap!

Liturgy is an issue. We have been saying Mass, sanitising hands at various points during it.  The hosts for the ‘congregation’ are on a large ‘paten’ that is actually an oval liturgical platter or tray and a purificator put on top of the metal surface and the hosts are laid out with good spacing between them.  This liturgical platter is placed on the front of the altar nearest the congregation and the altar missal is at an angle so the aerosol spray from the celebrant’s mouth is not directly over it. The tray is brought by the celebrant to the three members with mobility difficulties who take their host and consume it. Then the ‘congregation’ form a line with personal distancing and go to the altar and take their host and consumes it.  No intinction.  The celebrant only consumes the large host he uses for the mass and consumes the contents of the chalice as well. Some members who were in isolation missed out on the advice at the time on how to celebrate the liturgy safely so sometimes there are reactions to if the celebrant coughs into their hand or handkerchief and not immediately sanitise.

It is noticeable some pick up information and put it into practice, others are slower to take it on board and practice it or missed out on the explanation at the time due to being in isolation or not hearing it. Members become concerned and the responsibility is shifted to leadership who are expected to follow up so last week we started a “Covid Response team” and will initially have weekly meetings and share the responsibilities and delegate members to be more involved.

The Rector, Mission Office Director, Food purchaser, Regional Rep., Nursing Staff, a Representative of the House Staff and Representative of the Residents make up the team and they will now take the joint responsibility in responding to preventing Covid situations or will handle future situations.  One member noted during it that since the sanitising regime begun there was no one with colds or flu in the house. One action from the team meeting was to expand the tea area.  This seating area is used for the twice-daily teatimes and weekly socials (one on Thursday evening before supper and one on Sunday afternoon before lunch for 35 to 40 minutes).  We opened the moveable wall to include the TV room and it also helps give a little cross draught without opening the windows.

The government has been implementing guidelines that are called a “roadmap” for opening up after the lockdown. As most residents are over 70, they remain under fairly strict conditions around going out of the compound, visiting and receiving visitors. While we have had some maintenance workers in the house working on plumbing and electric faults, they are not seen as visitors and they wore suitable protection.  The new Covid-19 response team have recommended no visiting or visitors to the house due to the serious situation members have gone through until July. The team will need to keep residents and staff updated so it will have to share information for the residents and house staff to catch up on the situation.

.And so we continue to live, a sufficient motive to keep washing our hands and sanitising surfaces, the May rosary session in the evenings has continued into June and other prayer events are also seeing people gather, and what’s more we are still speaking to each other too!!