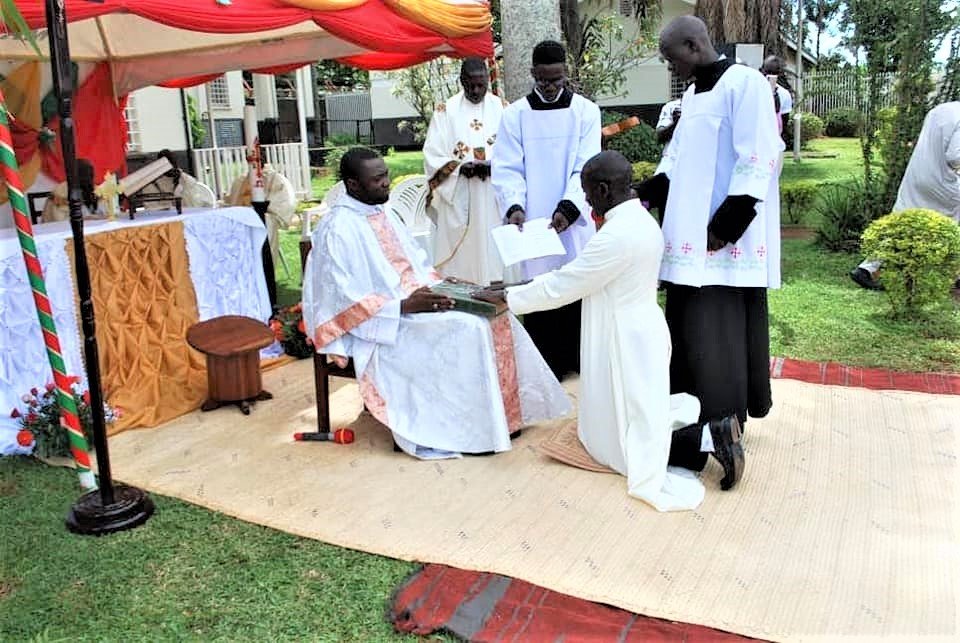 Last year, at the request of the General Council, I had the privilege to preside at the Temporary Oath of seven of our students in Jinja. It was one of the most boring liturgical events I have ever attended in my life. There was no singing or merry making, all because of the Corona lockdown. We were all gripped more by fear than caution.

This year seems different as things are a bit relaxed in Uganda.

Last weekend I officiated yet again at the Temporary Oath of three of our brothers: Evans from Homa-Bay, Kenya, Petereric Nyaga from Meru, Kenya and Joseph Tusiime from Hoima Uganda. It was a small but really colourful ceremony despite the restrictions. During the ceremony the brothers were implored to be fruitful. And for them to be such, they had to be rooted in Christ, listening and learning from him with a humble attitude like that of St. Joseph. They were also encouraged to be a sign of hope to a world that is sick and broken. Their fruit bearing life will be their only witness to such a world and that is the difference they will make.

St. Joseph with a father’s heart worked diligently and never complained, even as a poor carpenter. Making a commitment means we listen to and do the will of God and like St. Joseph to be able to carry out any little responsibility entrusted to us. The cross which they received during the Oath ceremony should remain the source of their inspiration and a sign of the sacrifices they have to make.

The rector of Jinja Formation house, Fr Charles Okata, and his assistant, Fr. John Akain, and the community did a great job to prepare our candidates for the T.O. They also welcomed and thanked all who managed to come. Parents of students from Kenya could not make it because of the situation we are in but were represented by Uganda parents. We also had a small group of priests and Mill Hillers and a few friends of Mill Hill from Uganda.

We wish our three brothers God’s blessings as they begin their life of commitment.