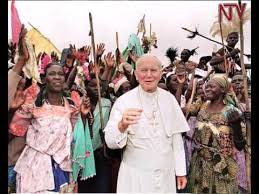 “In Africa, for example he promoted enculturation, bringing into the Church African cultures that are in agreement with the gospel,” The Cameroonian Cardinal says.

One of the setbacks that Christian Cardinal Tumi faced when Pope John Paul II appointed him Archbishop of Garoua, he says, was having few priests to serve in the local church, a challenge that he says the Pope solved immediately.

“I wrote to the Pope to tell him about this challenge and he sent me priests from the Archdiocese of Milan to help in my pastoral ministry. So, every year I received 6 priests from Milan sent by the Pope to help the Archdiocese of Garoua,” the 89-year-old Cardinal says and adds in reference to St. John Paul II, “The Pope also supported the local Church in the building of schools, hospitals and Parishes in Garoua.”