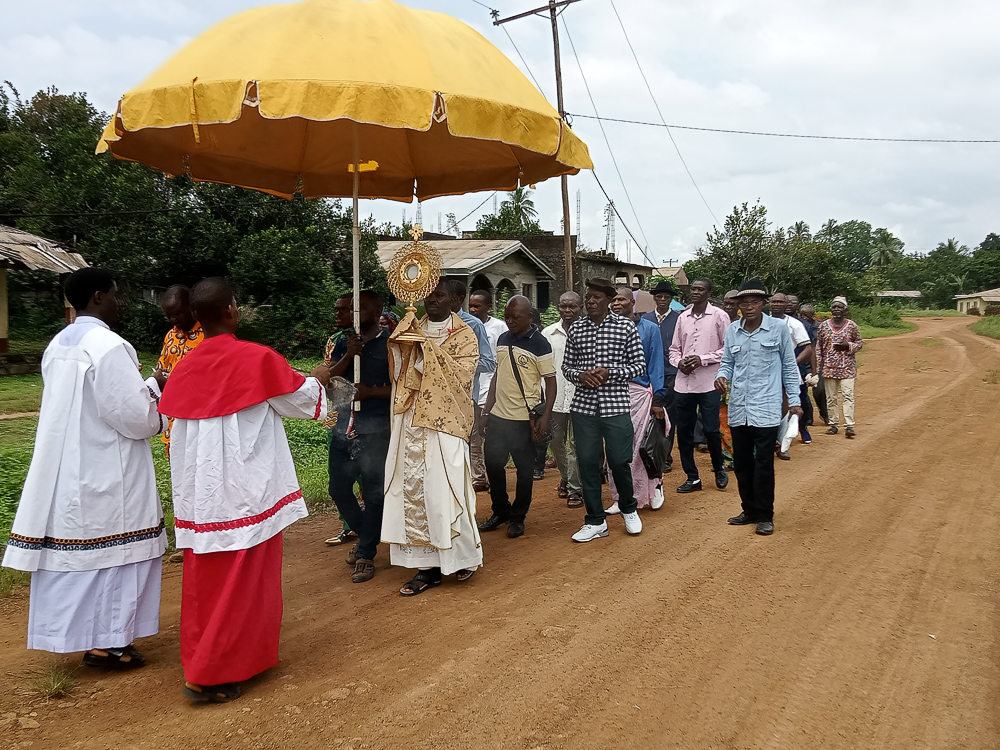 JOY AND FEAR: THE CONTRADICTION OF CHRIST THE KING IN KEMBONG

The celebration of the Solemnity of Christ the King in the ecclesiastical province of Bamenda is usually like no other solemnity around the year. This is chiefly so because, it marks the dawning of a new Churches year for all, and it is also a time for Catholic Christians in the ecclesiastical province to show in an outward sign, the innermost commitment to be Catholic as a local Church or a diocese through the procession with the Blessed Sacrament.

For us, as Christian in the neighborhood of kembong, it is a period to sing, dance and publicly give thanks to God for His protection and guidance during the course of Anglophone crisis and the Covid-19 pandemic. This period for us is usually filled with a lot of excitement and thrills as we publicly process to acclaim Christ as the Lord of the universe and of our lives. Thus, like every local parish within the ecclesiastical province, we had ear-marked several activities to crown the day in a wonderful fashion. But, little did we know that on 21 of Nov. 2021 there was to be another day of doubt, suspicion and fear in the hearts of many Christians within parish of St. Martin of Tours Kembong.

The morning of that day seemed all bright and calm, with everyone going about their usual Sunday activities undisturbed. For us as a parish, we had set in place a scheme to host the three- in-one celebration of Christ the king, the memorial of are two deceased priest (Cosmas and Sebastian) and the launching of the synod of synodality at the parochial level. The celebration had started with a lots of cooking, cleaning and liturgical arrangements when all of a sudden, a convoy of military cars armed with arms and ammunition dashed into the village in an unprecedented fashion.

Given prior experience of military deeds and action in the locality, their appearance sent unexpected shock waves of fear and panic within the communities. In fact like wild fire, the information spread through the whole village and the neighbouring villages about the unexpected military presence. With the previous experience of military encounters and the aftermaths of such, many local villagers including our Christians, started to flee from their home in order to seek refuge in their bush huts and farm houses.

As such in the midst of all this, one could not help but wonder, what would become of all the preparations ear-marked for celebration this day. As God would have it, we trusted in Him, hoping that all would turn well for the faithful. So, with this in mind, we began the celebration with a few Christians at holy Mass who, despite the air of fear and doubt, had braved all odds to come to church. So, while we began with two mission stations present at the Mass, we ended up with all mission stations whose faith challenged their fears to make it for the Feast day’s celebration. We had a reasonable number of Christians in Church at the end of Mass and from there, we proceeded to the public manifestation of our faith by singing, dancing and celebrating with Christ as we processed through the village.

Indeed it was a joyful experience to behold as many people came out to watch, dance and enthrone Christ as the King in their lives. We not only had Catholics who came out for the process but as we went about one could see even non-Christians  and Christians of other denomination coming out to watch, join or pray as Christ moved along. This truly brought joy and hope in the heart of many who, in the morning had run to the bush for shelter, out of fear, but in the afternoon came out to celebrate the triumph of Christ over fear and evil.

What a contradiction with these two processions. The first, which is the convoy of military, bringing fear, doubt and suspicion, then causing people to run to the bush, while the other, that is the procession of Christians with the Blessed Sacrament, bringing joy, happiness and life back to the community as people came to the streets to receive blessings in their lives.

This clearly points to fact that the power of Christ and the cross overpowers every force of evil in the world. However, in contradiction, we ended the celebration well and all returned home with joy. But the big question which remains unanswered is what becomes of the future of Kembong village with the heavy military presence in these communities? Nonetheless, with faith we believe that the power of Christ is always stronger than any earthly force and power.