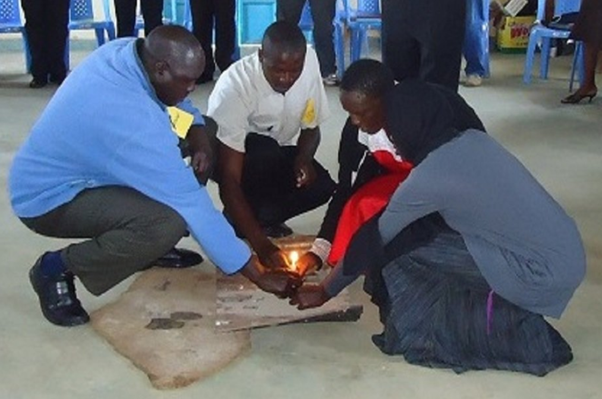 KAP’s main objective is “To facilitate, promote and create innovative and sustainable educational and counselling approaches to mitigate the impact of societal breakdown, especially violence, abuse, trauma, addictions, HIV/AIDS and related problems and environmental degradation”.
Its main areas of interest are (A) Trauma Management, Prevention and Peace, (B ) Addiction Prevention, Community-Based Treatment & Referral, (C) HIV/AIDS Behaviour Interventions and (D) Comprehensive Recovery for Extra Vulnerable Youths. Care for the environment is integrated in all components.
KAP sees societal cohesion, community ownership, personal responsibility, true commitment and therefore true voluntarism as vital prerequisites for healing and defeating violence, trauma, addiction, HIV and restoring environmental damage. KAP’s work is based on a strong and practical spirituality with an ecumenical and interfaith character.

“I am a girl aged 9 years old living on the slopes of Mt. Elgon. During school holidays I am always assigned by my parents to fetch firewood, water and look after animals. I remember well that during the December 2018 holiday, I and two of my friends were going to fetch fire wood in the forest as usually. However, on the way, I was a few meters behind my peers, they took a turn and I struggled to reach them. Then unfortunately a known person armed with a sword emerged from behind and ordered me to stop and talk to him. I was frightened, I tried to scream and shout calling for help but all in vain. After a long struggle I was overpowered and raped. After the incident I went home full of pain and feeling guilty. My mum was not around and when my father came, he couldn’t understand what I went through. Instead he confronted me harshly and caned me mercilessly for delaying to come back and walking alone in the forest.

A week later I was sent to the nearby market. To my shock most of the people, even grown-ups, were looking and pointing their fingers at me and talking about my story. I felt so guilty and confused and forgot all that I was sent to buy. Another blow back at home from my dad……. “mjinga unachanganyikiwa ndio maana huyo mtu alikudhulumu”. I was left in dilemma not knowing what to do. Back to school was the same stigma from peers. I was nicknamed by the name of the perpetrator. I had sleepless nights full of nightmares and flashbacks. I appreciate the effort of the Community Resource Person from KAP who approached my parents and introduced us to KAP for psychological counselling, referral for medication and legal action. Even though the perpetrator has not been arrested because he is in exile, but I am free from the pains I went through.”

The client went through a series of traumatic events with different forms of child abuse from child labour, sexual abuse and physical and psychological/emotional abuse. Through counselling the client was able overcome the nightmares and rebuild her self-esteem. The parents understood how they contributed to the abuse of the girl and promised to support her throughout the healing process.

Before the training, Josephine was violent and would inject herself with drugs. She slept on verandahs, ate leftover food from hotels and lived in the streets for 14 years. She was also engaged in sexual affairs and had been jailed thrice in a span of 2 years. Later on she got married but there were more and more problems because of the kind of life the streets had exposed her to.

In 2019, she joined KAP which was held at the Revival Church of the Living God and gradually she reduced the intake of drugs and alcohol until she finally stopped.

She explains that the KAP trainings have helped her a lot, especially in her recovery from substances like alcohol, miraa, bhang and ‘kuber’. During her recovery her family warmly received her and now they can share ideas, eat together and she has a good relationship with her nuclear family.

Josephine now takes care of her family, though some of her in-laws still want to use her to transport alcohol. Thanks to the follow ups by the KAP team, she remained strong and decided to focus on her recovery. She has learned to be patient and trusts that God will grant her the strength to move on; She has also distanced herself from people who want to lure her back into her old habits and keeps herself busy by looking for casual jobs. She is grateful to KAP for helping her change and prays that they will continue reaching out to others who are most needy.