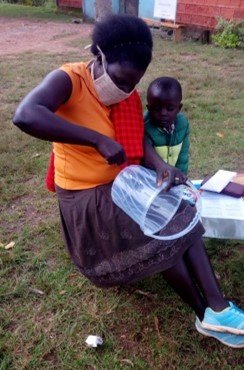 Jacinta van Luijk MHM , Mill Hill lay missionary associate, is the driving force behind the KItale Community Advancement Programme (KAP. She shares the searing story of Lucy (not her real name), one of th e particpants of the ‘unreached youth’ programme.

The story of Lucy, participant in the training for ‘unreached’ young people in Sabata

“I am a single mother, 21 years old. My problems started 6 years ago when my parents separated. With difficulty I completed my high school education and started a new chapter in my life. I got a boyfriend and after three months I found out I was pregnant. Fortunately, my friend promised to support me. However, my mother was very bitter about the situation and tried to force me to have an abortion. I refused and gave birth to twins.

My mother still didn’t want to know anything about my boyfriend, nor did she like my children. She hated my friend, called him names and threatened to curse him, although he supported me as he promised. She threatened me with the same if I continued the relationship. I therefore decided to cut off communication with my boyfriend and move to my grandmother. However, this prompted my children’s father to end our relationship, stop supporting his children and marry another girl after three months. I was shocked, depressed, hated and didn’t know what to do.

The only option spinning in my mind was to end my life and that of my children. I bought agricultural poison. Unexpectedly, however, we received a visit from my cousin. He had problems and was going to stay for a week. But unfortunately he found the pesticides I had hidden in the yard. After two days he committed suicide. What a tragedy! I was very shocked and traumatized. I felt incredibly guilty, angry and deeply regretful. Of course I couldn’t tell anyone that I had brought the poison into my house to kill myself and my children. Out of frustration, I vented my anger at my children.

It was during this confusing time that KAP came to work near us. I was allowed to participate and through the training and guidance I became aware of myself and the dangers to which I exposed myself and my family. I began to understand myself better and learned about all kinds of important facts, developments and values ​​in life. I began to understand that my mother was also transferring her own anger and frustration at her broken marriage and single parenthood onto us.

The training has taken a heavy weight off my shoulders. I feel healed. I started making choices and I was able to set goals in my life. Also, I now have better communication with my father. He is willing to support me to achieve my goals.

I was not aware of the nature and depth of my problems before attending KAP’s youth workshop in April 2021. Many thanks to the KAP family for this bright spot in my life.