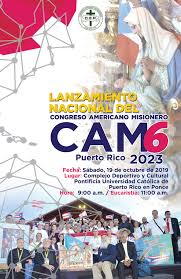 Three important events are taking place in Mexico City these days, which concern the pastoral and missionary conversion of the Church on the American continent from the perspective of Pope Francis’ Evangelii Gaudium. The first, which begins today, is intended for missiologists. The continental Seminary of Missiologists is held from February 14-16, which aims to trigger an academic reflection on the content and methodology of teaching theology and missiology in America. This space of study, reflection, and discussion, under the title “Transforming oneself to Con-forming an Outgoing Church”, will try to respond to the current challenges of the mission ad gentes, offering a contribution to the missionary maturation of the communities, pastors and continental institutions.

On Sunday, February 16,  in the Basilica of Our Lady of Guadalupe, the celebration will take place for the official launch of the path towards the VI American Mission Congress (CAM6), to be held in Puerto Rico in 2023. The Mass will be presided over by Archbishop His Exc. Mgr. Giampietro Dal Toso, Adjunct Secretary of the Congregation for the Evangelization of Peoples and President of the Pontifical Mission Societies (PMS). It will be concelebrated by numerous Bishops and priests, as well as by the National Directors of the PMS from all over America, who from February 17 to 20 will give life to the PMS Continental Assembly. Representatives from 23 American nations are expected to attend. In this context, particular attention will be given to the contribution of the PMS to the evangelization of young people, from the perspective of the recent Synod of Bishops on young people, and to the socio-political situation of each country in a missionary key.