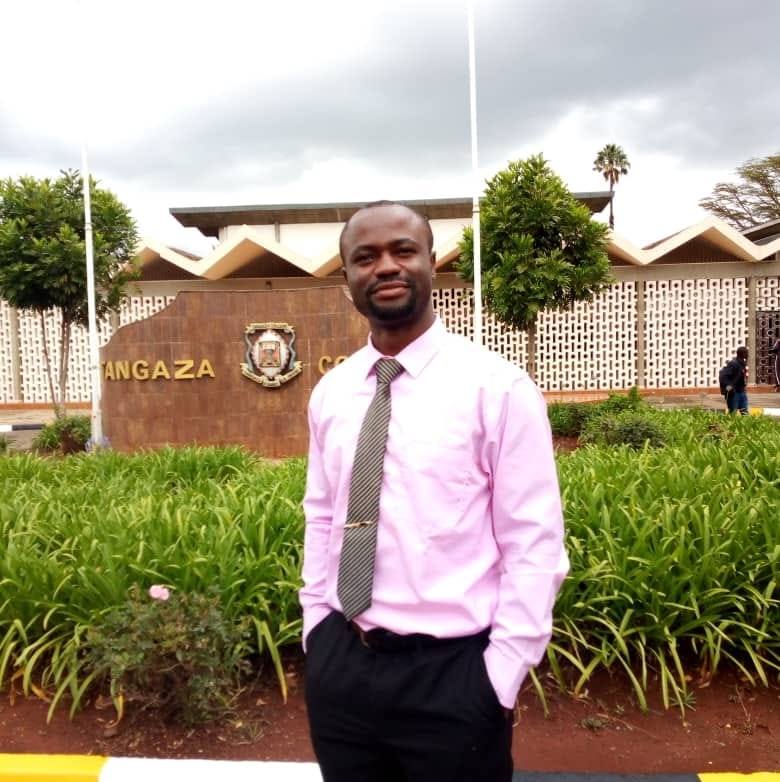 When we started the formation year in August 2019, I was assigned to Kenyatta National Hospital for weekend pastoral experience.  During one of my visits to the hospital, before the outbreak of COVID 19, I had an experience with one of the patients. I greeted the patient and he responded in a positive way. ‘I am Nobert Yarshikeh from Cameroon, a missionary student, and I am studying in Nairobi, at Karen, Tangaza University College. I do come here on Sundays to visit the sick because I love them’. I asked if I was allowed to visit him and he responded that he was happy that I had come to visit him and that I was most welcome.

He was John Louis, not the real name. John Louis had a car accident along the Kitui highway.  The car was hit by a lorry, and there were four of them in the car, and he was in the back seat. They returned from a visit. The accident happened around 3 pm on their way back from the visit.  He only realized himself when he was in a clinic. I noticed that he was relaxed when he introduced himself (because of the support from the nurses, doctors, family members, and friends). This helped him to be relaxed. Furthermore, he said that he did not know where the other people who he was in the car with were taken. He was taken unconscious to a nearby clinic for first aid and after that he regained consciousness. The person who took him to the clinic for first aid picked up his phone. The person immediately communicated to his wife and his family members that he was in hospital due to a car accident. He thanked God that his phone never had a password. After the first aid, he was immediately taken to Kenyatta National Hospital.

He said he used to hear of the story of the Good Samaritan and now he experienced it.  He continued by saying that the Good Samaritan who picked his phone accompanied him to Keyatta hospital and he was in constant communication with his family members. A few minutes after their arrival in the hospital, the family members immediately arrived also. They arrived when he was taken to the theatre for an operation. They had to stay there until he was brought back from the theatre. Among the family members who arrived in the hospital were his wife, his three brothers, and his uncle. His legs were in bad condition because he was in the back seat. He had been here for ten days now. There was great improvement since the day he arrived here. He thanked God for manifesting his love to him in the person of the Good Samaritan. Furthermore, he continued to thank his family members (his wife, his brothers), his friends, and the staff at Kenyatta Hospital for their support since the day he had the accident. After reflecting on this wonderful and enriching experience, I had the following insights.

I noticed the following feelings during the course of my encounter with this my beloved friend. These feelings were, contentment, pains, relaxed, sense of gratefulness despite all the pain he was going through, and an openness in sharing. Personally, I was challenged by the openness of John Louis in sharing. Furthermore, I had inner joy, peace, and satisfaction after the encounter with John Louis in these circumstances.

After listening to John Louis I noticed that he was a friendly, hospital, outgoing, honest, generous person and he was very supportive of his family members and friends. This was very clear in his sharing. His family members, friends, and the nurses as well as the doctors were very supportive to him. Since the day he had the accident till today the above people have supported him in different ways and it is because of this love and concern from the different people that he is relaxed, and not too stressed and depressed about his job and other things. In his sharing, he mentioned that ‘no one is an island’ – meaning we have to be sociable with one another despite our state in life. We have to share with one another in times of joy, pain, as well as in suffering.

Personally, I have always tried my little best to share the little I have with the needy and my friends. I tried my little best to support my friends, the needy, my family members, and my fellow students in times of need. Love and concern are healing. I affirm this because the love, care, and concern from my family members, fellow students, and friends have always been my source of strength in times of crisis in my life.

In the course of listening to John Louis he highlighted a number of aspects in regard to our relationship with God. For instance, the story of the Good Samaritan: he experienced the same story as in the Bible because he mentioned that were it not for the Good Samaritan who assisted him to the hospital and  called his family members he would have died. He thanked God for his unconditional love and protection of him. God manifested himself to him through this Good Samaritan. Secondly, John Louis was grateful to God for surviving the accident because according to him the accident was terrible.  In addition, he mentioned that we are bound to experience pains, sufferings, and trials in life but experiencing all these does not mean that God is not there but rather such are necessary in life because it makes us trust more in God. He is a prayerful, hopeful, and faithful man. He continued to rely on the healing power of God as well as the effort of the doctors and the nurses in the hospital.

I observed that he had his Bible beside his bed showing that he meditated on the word of God. Finally, he viewed his situation not as punishment from God but rather he was able to transcend the pain he was going through.

At a personal level, this experience and other experiences in the hospital have caused me to intensify my prayer life. Secondly, I pray for the sick on a daily basis. Thirdly, I am challenged due to the faith, trust, and hope which John Louis was manifesting despite the pain he was going through. There are times in my life I have found myself almost loosing hope because of the challenges. I am encouraged to have faith, trust, and hope despite the situation I may be going through. John Louis, despite all that he was going through, knew God was with him and because of this he continued to thank and to praise God for his protection. John Louis was very grateful for my visit and he encouraged me to keep up my visits and assured me of his prayers. I felt empowered by this experience in Kenyatta National Hospital. This encounter with John Louis has enriched me in different ways both psychologically, socially, and spiritually. Being with the sick is one of the best ministries from my pastoral experience although the start is not always easy.