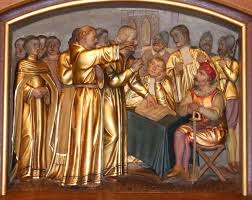 These were a group of nineteen Dutch religious, including Franciscans, Dominicans Premonstratensian Canons and diocesan priests, who were hanged by militant Dutch Calvinists at Briel in 1572, during the war of independence with Spain.

After imprisonments and tortures, a mob hauled them before the fanatical pirate Admiral Lumey. William of Orange ordered their release and the local authorities deplored the arrest but to no avail. When the group refused to deny Catholic teaching on the Eucharist and the Papacy, they were tortured and hanged at a deserted monastery near Briel.