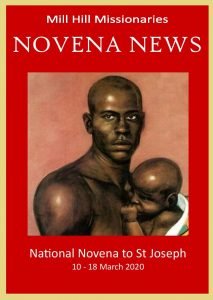 Searching for an image of St. Joseph to put on this year’s cover of the Novena News, I was struck by this picture that I received from our archive collection. It is not your usual image, I agree; but while we do not know what St. Joseph really looked like, we do know from the gospels that he faced many of the challenges that face so many fathers around the world today.

There are several things about St. Joseph that strike me. The first one is that there is really so little about him in the New Testament. Only two gospels ever mention him by name: Matthew and Luke – and then he disappears silently and without a trace shortly after the infancy narratives in both. Yet, even from this apparently sparse material, we learn so much about him that he lends his patronage to so many of life’s causes, such as: fathers, workers, carpenters, immigrants, estate agents, the unborn, and a happy death.

Another is his absolute openness to God’s guidance and trust that, whatever happened, God would see him right in the end. What else could have guided his response to the news that Mary, his fiancée, was pregnant by someone other than himself prior to their wedding? He would have been perfectly within his rights to have her stoned to death for adultery. Instead, he took her to be his wife. How many fathers in today’s world are bringing up and caring for children that are not their biological own?

But what strikes me the most about St. Joseph was that he was a refugee. In fact, when we read about him in the gospels, he is nearly always on the move. Not only was he forced to travel to Bethlehem at the command of a distant emperor in order to be registered for the paying of taxes, he was then forced to flee to Egypt to escape the mass infanticide caused by the jealous wrath of a king who felt his power and authority being threatened by St. Joseph’s new-born son.

How many people today are forced to flee their homes and countries to seek sanctuary elsewhere? How many are forced to flee from warfare, terrorism, religious persecution, and, increasingly, drought and famine brought on by the effects of climate change? Over the years, we have been besieged and horrified by images of overcrowded dinghies, refugee detention centres, migrant camps and children’s bodies washed up on beaches. The worldwide number of migrants reached 272 million in 2019, according to the UN Department of Economic and Social Affairs – a number that includes some 25 million refugees.

Perhaps our cover picture this year will remind us that there are literally millions of Josephs in our time, mostly from the poorer countries of the Global South. We usually think of and pray to St. Joseph the Worker, the Husband of Mary, the Foster Father of Jesus, the Missionary. Perhaps this year we can also think of St. Joseph the Displaced Person, the Refugee, the Migrant; the one who puts a name to the millions made homeless through no fault of their own and who strive to find better futures for themselves and their families.

I would like to thank you all, once again, for your ongoing generosity, your prayers and support through your participation in the National Novena of St. Joseph, and for continuing to promote the Mill Hill Missionaries in your homes, schools and parishes.

May our Novena to St. Joseph this year remind us of Jesus’ call to welcome the stranger, to feed and clothe the needy and to recognise His face in all who turn to us for help.

May you be blessed and let this Novena of 2020 be a wonderful experience in your life.