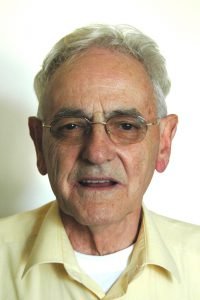 It is with regret that we inform you of the sudden death on Tuesday evening 11th December 2018 at 7.30 pm , at Missiehuis Vrijland in Oosterbeek, The Netherlands, aged 83, of

Gerard was born on 1stJanuary 1935 in Liederholthuis (Heino), in the Archdiocese of Utrecht, The Netherlands and received the names Gerardus Johannes at his baptism. His father, Herman, a farmer, was married to Maria (née Brookman). He had five brothers and three sisters.

After completing primary school Gerard went to a minor seminary for a short time. In 1951 he joined the Mill Hill formation programme in Oosterbeek as a postulant and became a temporary member in 1954. He learnt the trade of gardener and applied himself also to masonry and building. On 19 March 1960 he took the Perpetual Oath there.

His first appointment was to the Mill Hill formation house ‘Burnhall’ near Durham where he worked as gardener. In 1962 the great desire of his heart was fulfilled when he received an appointment to Tororo, Uganda, where he arrived in November of that year.

There he worked as a builder in a variety of projects, including building an extension to a hospital, schools and churches, and also taught himself the skills of a mechanic. A general councillor wrote in his visitation-report: “(Gerard) has built a very fine church at Teso College and is now finishing the church at Kapchorwa …” and added that Gerard is doing “all kinds of jobs”.

In 1982, following doctor’s advice, he returned to The Netherlands with heart problems. Returning to Uganda turned out not to be possible due to the political situation. As a result he was appointed to work in St Jozefhuis, Oosterbeek. Reflecting on this period he observed in an interview: “With much pleasure I have worked in St Jozefhuis. I have been able to be of service to many people and that gives me a feeling of satisfaction.” On the occasion of his Ruby Jubilee the General Superior wrote: “You have over the past number of years been one of the pillars of the St Jozefhuis community; your presence has done much to make the lives of the other people there stress-free and happy.”

In 2001 Gerard moved to Missiehuis ‘Vrijland’. He continued to be of service to the community still doing “all kinds of jobs”. An article about him in the in-house bulletin commented on his activities asNeighbourly love ‘avant la lettre’.May he rest in peace.

The funeral Mass will be celebrated on Saturday 15 December at 11.00 am at Missiehuis ‘Vrijland’, after which the burial at our cemetery there will take place.

‘If in union with Christ we have imitated his death, we shall also imitate him in his resurrection’. Rom. 6:5.