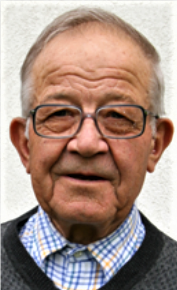 It is with regret that we inform you of the death on Thursday morning, 14 March 2019, in Herbert House, Brixen, Italy, aged 90, of

Josef was born on 10 April 1928 in Terenten, in the Diocese of Brixen, South Tirol, Italy and baptised the next day. His father, Johan, a farmer, was married to Amalia (née Unterkircher). Josef had two brothers and four sisters.

Having worked initially as a cobbler, Josef left his home-country in 1955 and began the Mill Hill Training for Brothers, which he did partly in Oosterbeek, The Netherlands, and partly in Freshfield, England. To this purpose he learnt the Dutch language. He specialised in farming and gardening, and followed courses in mechanics of vehicles and agricultural machinery. He also had a pilot license. On 19 March 1958 he took the Perpetual Oath in Oosterbeek.

Farming and gardening became a major part of his life. After his Perpetual Oath he was appointed to take responsibility for the gardens in Courtfield. In 1961 Josef was appointed to farming in Slingerlands, in the U.S.A. where he ran a cattle farm. From 1971 to 1974 he was a part time student at the St Rose and Sienna College, near Albany NY.

A big change came for Josef when in 1974 he was appointed to Buea, Cameroon. He learnt Pidgin English and worked for three years doing maintenance work in various parishes. He was then invited to be an administrator in the Bishop’s Office. In the last four years of his stay in Cameroon he became the manager of a palm oil project. He then handed it over to a cooperative he had formed in the meantime. At the Chapters in 1982 and 1988 Josef was delegate for the Brothers.

Due to illness Josef was appointed to the German Speaking Region in 1985 and, apart from an eighteen months stay in the Falklands, has been there until his death. Until 2004 he worked in the Missionshaus in Brixen, after which he retired to Herbert Haus. During his retirement years he looked after the flowers inside and around the house. He loved walking, and walked down to the town and back up the steep hill but in latter years preferred to take the bus. Last year he celebrated his Diamond Jubilee as a Mill Hill Brother.

Josef suffered a lot of pain during the final days, but died peacefully in the end. The funeral will be in the parish church in Brixen on Monday 18 March at 3.00 pm after which the burial will take place in the Mill Hill plot of the local cemetery. May Josef rest in peace.

‘Jesus said: “Think of the flowers; they never have to spin or weave; yet, I assure you, not even Solomon in all his regalia was robed like one of these. Now if that is how God clothes the grass in the field (…) how much more will he look after you, you men of little faith!”’ (Lk 12, 27-28).