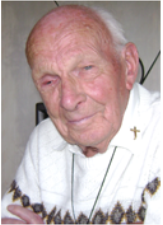 Anton was born on 19 January 1919, just after World War I in Leiden, the Netherlands. His father, Johannes, married to Louisa (née Leroi) was a timber merchant. Anton was one of ten children and had four brothers and five sisters. He studied in the Mill Hill College in Tilburg. With World War II beginning in 1939 Anton was not able to go to Mill Hill and so he completed his study for the priesthood in The Netherlands. From 1939 to 1941 he studied Philosophy in Haelen, and then went on to Roosendaal for the study of Theology. On 18 May 1944 he took the Perpetual Oath in Roosendaal and was ordained priest on 9 December 1945 in the Convent Chapel of ‘Mariadal’ in Roosendaal by Bishop Hopmans of Breda.

Anton was appointed to the diocese of Auckland, New Zealand in 1947. However he began his priestly ministry in parishes in The Netherlands, in his home diocese of Haarlem, until a passage could be arranged for himself and three other Mill Hill Missionaries to get them to New Zealand.  The boat in which they sailed could take them only as far as Sri Lanka. They were stuck there for several weeks, depending on the hospitality of the Redemptorists, before they could get a boat to New Zealand.

They arrived in Aotearoa, New Zealand, on 25th June 1948. Pa Tim, as Anton came to be known, was  first appointed for a year as curate in Waitaruke. A year later he moved on to St Michael’s, Ohinemutu. In 1955 he became curate in the newly started parish of St Mary’s where Fr. Dan McKenna was parish priest. He served there for 12 years and became know as Father Fixit. This was due to his active involvement in maintenance work on buildings and his ability to convert surplus building into churches and presbyteries.

From 1967 till 1971 he was Parish Priest in St Michael’s parish.  Pā Tim’s involvement as chaplain with the Catholic Schools, both Primary and Secondary, in Rotorua was considerable; in the planning, the building as well as in the maintainance. In 1971 a much needed break came his way and he could travel back to The Netherlands for a year’s home leave.

Returning from leave he was curate again in St Mary’s and after some years, Bishop Gaines asked him to form a new parish in Rotorua for Ngāpuna and the Eastern Districts.   So he towed a surplus army barracks all the way from Turangi and from it made St. Joseph’s Church and Presbytery. That was in 1983. Over the long time of his ministry Pa Tim mostly worked in the Rotorua area, bringing the Good News to Maoris and Polynesians as well as those of European descent.

When his health began to decline he transferred to Mercy Parklands, in the Rest Home section and later to a bigger room with hospital amenities. May Anton rest in peace.