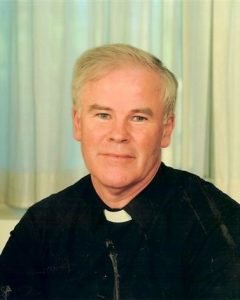 It is with regret that we inform you of the death on Sunday morning, 22nd October 2017, in Hartsdale, New York, aged 72, of

Brian Coffey was born on 1st March 1945 in Killarney, Co. Kerry, Ireland. His parents James and Mary (neé Couniham) had a family of five girls and three boys. James was a farmer. Brian was educated at our college in Freshford, Co. Kilkenny. From 1965 to 1968, he studied philosophy, first at University College Dublin (1 year) and then at Milltown (2 years). From 1968 to 1972, he studied theology at St Joseph’s College Mill Hill. He took his Perpetual Oath on 1st May 1971 and on 25th June 1972 was ordained to the missionary priesthood in St John’s Church, Tralee, Co. Kerry by Eamon Casey, Bishop of Kerry.

Following a period in France to learn French, Brian took up his appointment to a busy mission station in Yalisele, Diocese of Basankusu in (then) Zaire. There he served until 1979. Though punctuated with health challenges, this was a happy time for Brian, serving a church that he found to be “ever so active and healthy”. Illness finally forced him to move to the Irish Region, where he worked for a few years in parish promotion and vocations ministry. On completion of a renewal programme in Dalgan, he returned to Basankusu in early 1983, but only for a brief period, as illness forced him once again to leave. He was appointed to the Irish Region and parish promotion work. In 1992, he was appointed Administrator and Organising Secretary in Freshford House, Kilkenny. This was followed by an appointment to North America i

n 1999. The following year, he joined a multi-faith chaplaincy team at the Good Samaritan Hospital in Suffern, New York State – an assignment which he found highly rewarding. He also helped out at the nearby parish and did supplies in other parishes in New York City. He still had some time left over to play golf and go to the gym, as well as spend holidays in his native Kerry. He happily served as chaplain to the Kerrymen’s Association of New York. At one point, the Superior General noted that wherever Brian served, it was always conscientiously and with imagination, and with a smile.

Brian was found dead in his room in Hartsdale on Sunday, 22nd October. The cause of death was apparently a heart attack.

The funeral arrangements will be announced later. May Brian rest in peace.