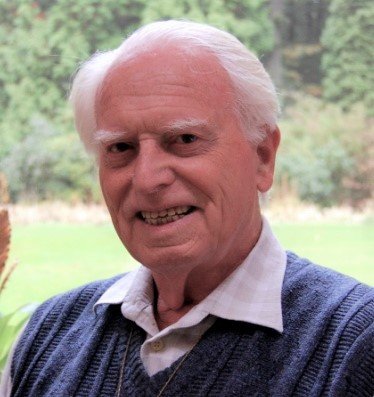 It is with regret that we announce the death on the 13th day of March in Missiehuis Vrijland, Oosterbeek, at age 93 of

Hans, as we knew him affectionately in Mill Hill, was born on the 16th of December, 1928 in Hengelo, Utrecht, the Netherlands. He was baptised in St. Lambert’s Church in Hengelo on the 19th of December, 1928. He was Confirmed at s’Hertogenbosch in 1942. Hans had two brothers and three sisters. His father was Albertus Burgman, a Draughtsman, and his mother was Franciska Burgman, nee Ahne.

Hans received his Primary education locally at Hengelo at St. Bernardus’ School, but for his Secondary education, since he felt called to the missionary priesthood, he received first in Tilburg (1941-1945), then at Haelen (1945-1947). For his Philosophy studies, Hans attended our College in Roosendaal (1947-1949), then proceeded to Saint Joseph’s College, Mill Hill, London for his Theology studies (1949-1953). It was in the Chapel of St. Joseph’s College that Hans took the Perpetual Oath on the 1st of May, 1952. He was ordained a Mill Hill Priest in the Olympia Stadium in London at the hands of Cardinal Griffen of Westminster, London, on the 12th of July, 1953. Recognising Hans’ academic capabilities, the General Council appointed him to Further Studies in Rome, Italy. There, Hans first obtained a Baccalaureate and Licentiate in Philosophy in 1955, then a Doctorate in Philosophy in 1957, both achieved from the Pontifical Gregorian University in Rome. Other further studies were in Music and the Arts. He was an accomplished musician of the organ, guitar and flute.

Anticipating a successful completion of his studies, the General Council appointed Hans to work in Nsambya, Kampala, Uganda, as an Assistant in Bukerere. At the same time, he was Professor of Philosophy at Ggaba Major Seminary. In 1962, needing his talents nearer to home, Hans was appointed onto the teaching staff at the Missiehuis in Roosendaal, Holland. In 1970, he was elected as a Chapter Delegate. It was while attending the General Chapter that year that he was elected Vicar General and Director for the Home Regions on the General Council.

After his six years of serving on the General Council, in 1977 Hans was appointed to the Archdiocese of Kisumu in Kenya, where he created an Urban Apostolate Team in a slum area of Kisumu City on the shores of Lake Victoria. At that time too, he was engaged in Prison Chaplaincy work. He created many Basic Christian Communities amongst the many dwellers of those poor areas of Kisumu. Hans wrote a great deal about the Church in Western Kenya, his experience of Basic Christian Communities and Urban Apostolates, and the pilgrim Way to Santiago de Compostela.

In 1992, Hans accepted an appointment as parish priest of Saint Joseph’s Parish, Kisumu. By 2009 Hans was ready to retire from parish ministry. However, he continued to work in Kisumu with his team on the Kisumu Urban Apostolate Project based at Pandipieri, a densely populated area of Kisumu City. While there, Hans also took a great interest in the local Mill Hill formation programmes at Luanda and in Nairobi, offering his qualifications and experience generously. By 2017 Hans was ready to retire to the Missiehuis in Vrijland in his native Netherlands.

Wherever he went, Hans made it a priority to learn the local languages, cultures and customs. Indeed, by the time he retired he could converse in his native Nederlands, English, German, French, Italian, DhoLuo, Luganda, as well as in Greek and Latin. Tall in stature and whole-hearted in his commitment to the Lord as a Mill Hill Missionary he won the admiration of so many within the Society and far, far beyond. A man who lived our motto, amare et servire. His funeral rites will be on Saturday the 19th of March (St. Joseph’s Day) at 1.30.pm. in Saint Lambertus basilica in Hengelo in the Netherlands. May he rest in peace.