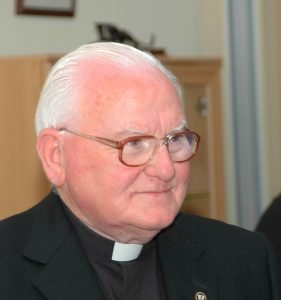 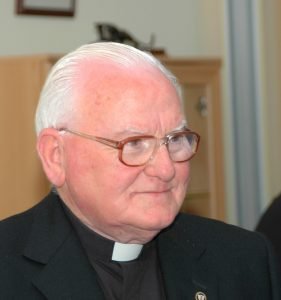 It is with regret that we inform you of the deathon Saturdaymorning, 5thMay 2018, inTearmainn Bhride Nursing Home, Athlone, Co. Roscommon, Ireland,aged 86, of

Hugh was born in Cootehill, Ireland on 19 June 1931. His father, Thomas, who was a farmer, was married to Margaret (née McCabe). He had seven brothers and three sisters. One brother, Fr Terry Lee, who also became a Mill Hill Missionary, died just a week ago, on 27 April 2018. Their mother-tongue was the Irish Gaelic language. Hugh did his secondary education from 1946 to 1951 in Freshford after which he left for Roosendaal, The Netherlands, where he studied Philosophy from 1951 to 1954. He continued his formation in Mill Hill, London, where he studied Theology from 1954 to 1958. He made his commitment to the missionary life by taking the Perpetual Oath on 6 May 1957 and was ordained to the priesthood on 13 July 1958 at Mill Hill, London, by Cardinal Godfrey.

After his ordination Hugh left for Slingerlands, USA, where he was appointed to Vocations and Office work. He then received an appointment to Pakistan, where he spent the next 23 years of his life as teacher, headmaster, parish priest and bishop’s secretary. He first worked for a year in Rawalpindi, followed by a short time in the Chak 36 mission. From 1963 to 1968 he was appointed to Burn Hall School where he was House Master. In 1968 he became the Bishop’s Secretary in Rawalpindi. In 1972 he took on the responsibility of Headmaster at Kharian. Two years later, in 1974, he moved to the Bishop’s House in Rawalpindi, again as the Bishop’s secretary. At this time he also began work on getting land and building the Fatima Church and the Priests’ House in Islamabad. This was completed in October 1979 when he took up residence there. He had been serving the English-speaking community in Islamabad during his time as Bishop’s Secretary. On the occasion of his Silver Jubilee as a priest, the Superior General expressed his admiration for the way Hugh and his fellow Mill Hill Missionaries were engaging in the missionary work “with the accompanying hardships of climate and limited response.”

Last year he was diagnosed with a tumour on the liver, and in February of this year he retired for health reasons. His health continued to deteriorate and he was admitted to a nursing home. In a letter bishop Doran of Elphin Diocese expressed his gratitude to Hugh and spoke of “the tremendous service and faithful witness” that Hugh had given all these years. He died today, just after 2.00 a.m. May he rest in peace.

The body will repose in St. Brigid’s Church Curraghboy after the 7.00 pm Mass on Tuesday the 8th of May. On Wednesday the 9th May Bishop Kevin Doran, the Bishop of Elphin Diocese, will lead the celebration of Hugh’s Funeral Mass at 2.00 pm at St. Brigid’s Church followed by burial in Cam Cemetery.As Hugh and Terry were very close and kept contact over the years, his ashes will also be present at the funeral of Hugh. The ashes of Terry will be taken for interment in the Mill Hill plot of the Bohernabreena Cemetery in Dublin.