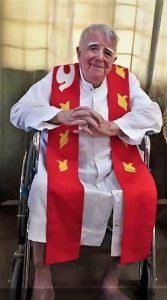 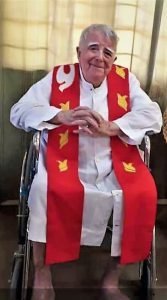 It is with regret that we inform you of the deathon Monday evening, 23 July at 18. 52 local time, in Kuching, Malaysia, aged 84 of

James, known by many as Winkie, was born in Bailleston in the Archdiocese of Glasgow, Scotland, on 27 November 1933, the fourth of ten children. He had seven sisters and two brothers. His father, also called James and a labourer by profession, was married to Catherine (née Kelly). From 1947 to 1951 James did his secondary education in Lochwinnoch and in Burn Hall, where he obtained the A-levels certificate. He then went on to study Philosophy in Roosendaal and subsequently to Mill Hill, London, for the study of Theology. On 7 May 1958 he took the Perpetual Oath and was ordained priest on 12 July 1959 by Cardinal Godfrey.

That same year he left for Kuching, Sarawak, where he was appointed. He served for three years in Kanowit before he was transferred to the mission at Serian. There he served as assistant priest while also being principal of the primary school. His service there was interrupted with an interval of one year during which he worked in Binatang. In 1971 James was appointed parish priest at St Ann’s parish in the Pedawan area (at: ‘Ten Miles’ outside of Kuching). In 1979 he took part in a renewal course in the East Asian Pastoral Institute in Manila. He returned to Serian in 1986; this time as parish priest. He later gave up this position so as to allow a younger local priest to take responsibility, while he stayed on as assistant. In 1987 he took part in a renewal seminar at the Missionary Institute London. In 2009 he underwent a heart by-pass and valve replacement surgery.

James spoke two dialects of the Dayak language as well as Iban and some Chinese. On the occasion of his Golden Jubilee of his ordination to the priesthood the superior general wrote in his letter of congratulations to James: “You have contributed greatly to the mission of the Church in many ways. You have been active as a tireless missionary in the jungles of the region as well as in the towns. You also have made a contribution to education as well as doing some publishing.”

In 2012 Fr. James retired from active priestly ministry due to health reasons. The first five years of retirement he stayed in the retirement home for priests in Kuching. In 2017, he went to the ‘Home of Peace’ where the Franciscan Sisters of Sarawak looked after him. Over the last three months his health deteriorated and three weeks ago he was admitted in the KPJ Hospital (a Kuching Specialist Hospital) and was in and out of the intensive care unit. He peacefully died yesterday evening after having received the Sacraments of the Sick and Holy Communion the day before.

Fr. James was a jovial man who won the hearts of many just by being himself. Yesterday his body was brought from the hospital to the Chapel of Mother Mary where he lays in state. On Friday 27thJuly his body will be transferred to the Cathedral. A whole night Vigil will be held from Friday 7 pm until the next morning. On Saturday 28thJuly at 10.00 am the funeral Mass will take place followed by burial at the Cathedral cemetery.May James rest in peace.