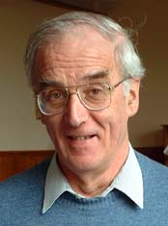 It is with regret that we inform you of the death on Monday night, 10 June 2019, in Herbert House, Freshfield, aged 87, of

John was born on 1 July 1931 in Hale, Cheshire, England. His father William, was married to Mary (née Edwards). John had two brothers and one sister. In 1949, after completing secondary school, he went for two years to Roosendaal to study philosophy. From 1951 to 1955 he studied theology in Mill Hill, London and took the Perpetual Oath there in 1954. On 10 July 1955, also in Mill Hill, John was ordained priest by Cardinal Bernard Griffin.

John’s first appointment was to the teaching staff in Freshfield. After a year there he was appointed to further studies in Cambridge, where he obtained a master’s degree in natural science, mathematics, physics, chemistry and crystallography, a diploma in history and philosophy of science as well as a diploma in education. During those years John was also an enthusiastic member of the students’ rowing club. John’s studies at Cambridge were interrupted by a year of teaching in Freshfield where he was re-appointed on completing his studies in 1962. In 1965 he became headmaster there and three years later also rector.

In 1972 he was appointed to The Philippines where he served in Pandan and San José for a spell of four years. In 1976 he went to Louvain, Belgium, to study Missiology and Anthropology. This was the period, following the Second Vatican Council, when many new and dynamic views were being developed on how to engage in mission especially in its relation with the local culture, and contextual and incarnational mission were key-words. And so, after obtaining a licentiate degree he went on to study for a doctorate. This he completed in 1982.

John was then appointed to teach at the Missionary Institute London. In 1982 he also became a member of the formation staff in St. Joseph’s College, Mill Hill. He became vice-rector there in 1984. He took a break from teaching in 1990, when he did a sabbatical in Chicago, U.S.A., at the Institute of Spiritual Leadership and the Jungian Institute. He returned to teaching in Mill Hill and continued living there until St. Joseph’s College closed in 2006. During the years he lived in Mill Hill John was also chaplain to the students at St. Michael’s Grammar School in North Finchley. When St Joseph’s College was sold, John went to live in Arkley where he became chaplain to the Poor Clare Sisters.

In a letter of congratulations on the occasion of the Diamond Jubilee of his ordination, the General Superior wrote: “… you have had an enormous influence upon the faith development of countless people, many of whom went on to become students and teachers of truth and goodness, and missionaries to boot.” In August last year John’s health declined. He was unable to stay in Arkley and went to retire in Herbert House, Freshfield. He died there peacefully on Monday at 11.15 pm. Reception of the body at Herbert House Chapel will take place on Friday 21 June at 4.30 pm. The Requiem Mass will also take place there on Saturday 22 June at 11.00 am, followed by burial in our cemetery.