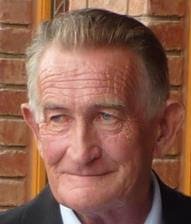 John was born on 29 March 1946 in Boheshill, Glencar, in the parish of Glenbeigh, County Kerry, Ireland. His father, after whom John was named, was a farmer and was married to Brigid (née Foley). John had three sisters and three brothers. From 1959 to 1964 he attended St Joseph’s College in Freshford for his secondary education. He then went to study Philosophy in the University of Dublin from 1964 to 1967 after which he went to Mill Hill, London, to study Theology until 1971. On 1 May 1970 he took the Perpetual Oath there and was ordained priest the following year in Killarney, Ireland, by Bishop Eamon Casey.

After his ordination he was appointed to Kenya. He learnt Kisii and Swahili and worked in Nyabururu mission from 1971 to 1976. He then moved to be administrator of St. Charles Lwanga Cathedral parish in Kisii town from 1976 to 1992. In that year John moved to Sotik pairsh, Nakuru diocese until 1995. Then he went to Salawa parish in the more challenging missionary area of the Kerio Valley in the Baringo region. John served there from 1995 to 2013. During these years he also undertook various renewal courses: the Faith and Mission Course in Dalgan Park, Navan, as well as undertaking the Clinical Pastoral Education programme at St. Vincent’s Hospital in Dublin.

On the occasion of his Ruby Jubilee as a missionary priest, the General Superior in his letter of congratulations commented on the paucity of correspondence in his file. He said that John “quietly got on with the mission”. John was withdrawn from Kenya for health reasons in 2014 and appointed home to the Irish Region, where he took part in courses in Irish Celtic Spirituality and a Contextual Approach to Scripture. In October 2017 he was appointed to retire to St Joseph’s House, Dublin.

After moving to Dublin John’s health had continued to deteriorate. He was regularly in hospital and unable to undertake pastoral activities outside the house.  He did, however, occasionally lead the liturgy in St Joseph’s House. Not a great TV watcher, he liked to listen to the local radio. His health continued to decline which eventually confined John to his room in May 2019. In June a cancerous growth was discovered and John was confined in Beacon Hospital, Dublin. Efforts to treat him were made but had to be discontinued since he was too weak. He died there peacefully this morning at 10.35. May John rest in peace.

Reception of the body at St. Joseph’s House, Rathgar, Dublin will take place on Saturday 24 August at 4.00 pm followed by prayers. The next day, Sunday 25 August, the funeral Mass will take place there at 12.00 noon. On Monday 26 August from 5.00 to 7.30 pm the body will be reposing at Flynns Funeral Home, Killorglin. It will then be transferred to St. Stephens Church, Glencar, where reception of the body is foreseen at  8.15 pm.  The funeral Mass there will take place at 12.00  noon on Tuesday 27 August followed by burial.