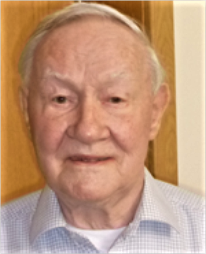 It is with regret that we inform you of the death at approximately 2 a.m. on Friday morning, 8th November 2019 in Southport Hospital, aged 92, of

Joseph was born on 18 January 1927 in Newbottle, County Durham, in the Diocese of Hexham and Newcastle. His father Alfred, a journeyman – butcher, was married to Kathleen (née King). He had one brother and three sisters. After completing Secondary School at St Peter’s College, Freshfield, he went on to Roosendaal, The Netherlands, where he studied Philosophy from 1948 to 1950. This was followed by studying Theology in St. Joseph’s College, Mill Hill, from 1950 to 1954. He took the Perpetual Oath there on 7 May 1953 and was ordained priest there on 11 July 1954 by Cardinal Griffin.

After ordination Joseph was appointed to further studies at Durham University where he obtained a degree in Latin, History, Greek and Economics. He also obtained a postgraduate Certificate of Education from London University. In 1958 he was appointed to teach in our College in Lochwinnoch, Scotland, and was much loved by the students there.

In 1963 Joseph was appointed to Kuching, Sarawak. He was recalled from there in 1966 to help out temporarily with APF organising work at home. The following year he was appointed to join the teaching staff in Burn Hall. In 1971 he was appointed to Uganda to teach at Namilyango College. Due to poor health this was a short-lived appointment and he returned to England the next year to engage in organising /APF work in Salford Diocese.  He was based in ‘Red Gables’, Freshfield.   In 1983 he moved to Burn Hall to continue the same work there. However, health concerns remained an issue and a year later he retired to Herbert House, Freshfield.

Joseph suffered from various ailments. He lived very simply in his room with few personal effects. He enjoyed watching television. He spent long periods of time in the chapel and in the garden. He had a sweet tooth and enjoyed all the dessert courses at meals. He would always make an appearance at the weekly social gathering of the community. In latter years, having become the oldest in the house, he was regarded as the “Father of the house”. Everyone used to look out for him. In recent weeks and months, Joe’s mobility declined, his deafness became more profound and his appetite diminished. About three weeks ago, he was moved to a more secure care facility in Millbrook House, Southport. After a fall in his room last week, he experienced a septic shock – a blood infection. He was admitted to the Acute Care Unit at Southport Hospital where he was well cared for by the hospital staff and was visited by the Rector and staff of Herbert House several times each day. He was also visited by his sister Philomena (herself 90 years), his niece Madeleine and nephew Francis. He died peacefully at approximately 2 a.m. yesterday, Friday, 8th November. The funeral arrangements will be announced later. May he rest in peace.