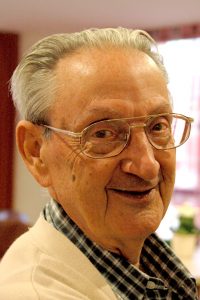 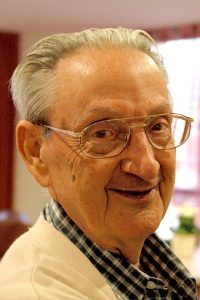 It is with regret that we inform you of the deathon Monday evening, 7thMay 2018, in Missiehuis
Vrijland, Oosterbeek, The Netherlands,aged 91, of

Karel was born on 14th January 1927 in Amsterdam, the Netherlands. His father, Gerhardus, a police sergeant, was married to Antonia (née Klijn). He had two brothers and three sisters. A niece, Toos Beentjes, is a Mill Hill Missionary Associate serving in Amsterdam. Karel was a pupil at our minor seminary in Hoorn from 1939 to 1944 and in Haalen/Tilburg from 1944 to 1946. He then studied Philosophy in Roosendaal from 1946 to 1948, and from 1948 to 1952 he studied Theology at St Joseph’s College, Mill Hill, London. He took his Perpetual Oath on 5th May 1951 and was ordained priest in the same college by Cardinal Griffin on 13th July 1952.

Soon after ordination, Karel took up his missionary appointment to the Apostolic Vicariate of the Upper Nile. He returned home in 1960 to teach in our College in Hoorn. By 1965 he was back in East Africa, where in the meantime Uganda had become an independent nation and the Apostolic Vicariate had been divided into a number of dioceses. Karel was appointed to Kampala Diocese (and later to the split-off Diocese of Jinja). Here he devoted himself with great zeal to ministry among the Busoga peoples, often in isolated and poor areas. In the latter years, he developed a strong interest in the building of basic Christian communities. He also taught at the minor seminary in Jinja for a number of years. He lived through the turbulent years of Idi Amin’s dictatorship, and was still at his post as the country began to get back on its feet under Yoweri Museveni.

In March 1998 Karel returned to the Netherlands, where he moved into Sint Jozefhuis. In April 2012, when advancing years dictated the need for more care he moved over to Missiehuis Vrijland. He continued to do parish supplies for many years in retirement.

Karel was known for his friendly, hospitable and always-happy nature, which made him a valued companion wherever he lived. He was held in high esteem by his missionary colleagues, who considered him a wise man and a true friend. The Painters’ Club that meets weekly in St. Jozefhuis will miss him now that his characteristic ‘huppeldepup’ – pronounced if a word or name just escaped him – will no longer be heard. Karel died in Missiehuis Vrijland on Monday, 7th May at 6:25 p.m. May he rest in peace.

The funeral Mass for Karel will be celebrated in Missiehuis Vrijland on Friday, 11th May at 11:00 a.m., followed by burial in our cemetery there.