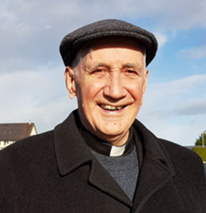 It is with regret that we inform you of the death on the afternoon of the 27th day of April, 2022 at the Beacon Hospital, Dublin, Ireland, aged 80, of

Mike, as we knew him affectionately in the Mill Hill Missionaries, was born and baptised Michael Peter on the 26th of September, 1941 in his local Parish of Crusheen, in the Diocese of Killaloe. He was from Doon, Tubber, Co. Clare. His father was Patrick O’Brien, a farmer, and his mother was Mary O’Brien. Mike was the second youngest of three brothers and two sisters.

At an early age, Mike felt called to the missionary priesthood. So, after his primary education he proceeded to the Mill Hill College at Freshford from 1954 to 1959. For his Philosophical studies, Mike was promoted to our College in Dartry, Rathgar, Dublin. From there he attended University College Dublin and obtained a Bachelor’s Degree in 1962. After graduation in Dublin, he was promoted to study Theology in Saint Joseph’s College, Mill Hill, London, 1962 to 1966. As his theology studies drew to completion, he took the Perpetual Oath to God in our missionary Society on the 1st of May, 1965 in the College Chapel. Just over a year later on the 10th of July, 1966 he was ordained a Mill Hill priest at our College in Freshford, at the hands of Bishop Birch of the Diocese of Ossory, Ireland.

Immediately after Ordination, Mike returned to University College Dublin (UCD) and graduated further with a Post-Graduate Diploma in Education in 1969. While studying for this, he was appointed onto the Staff of our College at Freshford. Later, in 1968 he was further appointed to our College Staff at Dartry, Dublin. Much to Mike’s delight, in 1969 he was appointed to work in the Archdiocese of Kuching in Malaysia. Government legislation had been put into law before his arrival that Christian missionaries could not stay more than ten years in Malaysia. Hence, in 1980 Mike had to leave this beautiful part of the Lord’s vineyard. His next missionary appointment enabled him to stay in the Far East. In 1981 he was appointed to work in the Diocese of San Jose de Buenavista, Antique, Philippines. There, Mike was to minister to the peoples of Antique for the next thirty-one years. While serving in the Philippines, Mike represented our Members as their Society Representative in 1995. He was a caring and conscientious Representative who worked hard to bring harmony and peace to our Mill Hill community and the peoples whom he served as Pastor. Mike found his appointment in Saint Teresa of Avila Parish a particular blessing. Set in a spectacular coastal region on the West of the island of Panay, Mike often enjoyed a daily swim in the sea that was close to his parish. A welcome respite from the tropical heat and humidity of the Philippines.

After some health issues in 2012 Mike handed over the parish to other Mill Hillers to return to his native Ireland. After treatment and rest Mike felt much better and volunteered as a Chaplain at the beautiful shrine of Our Lady of Knock in Co. Mayo, Ireland. He worked there from 2013. During March 2020 due to the Pandemic and the closure of the Shrine Mike moved our Mill Hill House in Dartry, Dublin, and in September officially retired there. Some weeks ago, his health began to deteriorate. He was hospitalised and received wonderful care from the Staff of the Beacon Hospital. Sadly, after a brave fight for life, Mike was anointed by his brother Fr. Martin before he died this afternoon. Eternal rest grant unto him, O Lord.

Reposing at St. Joseph’s House, 50 Orwell Park, Rathgar on Friday (April 29) from 2.00 pm. until 5.00 pm. His funeral mass will be held on Sat 30th Aprilat 12.00pm in St. Joseph’s Church, Terenure followed by burial at Bohernabreena Cemetery. The Mass may be viewed on https://www.stjosephsterenure.com/live-mass/