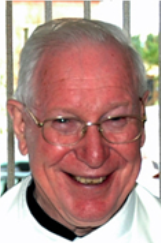 Noel was born on 23rd December 1928 in Grangemockler, Co. Tipperary, Ireland. His father, William, a farmer, was married to Bridget (née McGrath). Noel had five brothers and three sisters. Following secondary education at our college in Freshford, he studied philosophy in Roosendaal from 1948 to 1950. From 1950 to 1954 he studied theology in St Joseph’s College, Mill Hill, London. He took the Perpetual Oath on 7th May 1953 and was ordained priest on 11th July 1954 at Mill Hill by Cardinal Griffin.

Following ordination, Noel studied at Rome, where he obtained a Doctorate in Divinity in 1958. He then began teaching dogmatic theology at Mill Hill, where he also held the post of Master of Discipline. In 1968, he became president of the Missionary Institute London. A year earlier, he had been appointed fourth Consultor to the Superior General.

Noel was elected Superior General of the Society at the Renewal Chapter in 1970 and served for two terms, until 1982. Travelling to all continents, he transmitted the message and spirit of a Vatican-II model of church to our missionaries and local Church leaders.  In 1983, following a sabbatical in Rome, Noel was appointed to Kuching, Sarawak, where he was Professor of Theology at St Peter’s College and occupied a number of other positions in the seminary over 15 years. In 1983, he was elected Society Representative, and re-elected to that position in 1986. In 1988, he was Chapter Delegate for Malaysia/Indonesia. In January 1999, following sick leave, Noel was appointed from Kuching to the Irish Region, where he served as a chaplain at the busy apparition Shrine of Our Lady in Knock, Co. Mayo. In 2012, Noel retired to St Joseph’s House in Dublin.

On the occasion of his Ruby Jubilee, the then Superior General wrote: “you have exercised many ministries but you have always been the missionary priest witnessing to and making real for others the person and values of Jesus Christ Our Lord.” Noel will be remembered both inside and outside our Society as a wise and skilful leader, a dedicated teacher and a compassionate pastor.

In recent years, Noel had many hospital appointments to control the cancer in his body. Some months ago, he underwent an operation to remove a cancerous growth inside his mouth. Following some falls, he was admitted to St James’s Hospital on 5th July. There, in the presence of Michael, his nephew, he died peacefully on Thursday afternoon, 11th July. The reception of the body will take place at St Joseph’s House, Rathgar on Sunday evening, 14th July, and the Funeral Mass will be celebrated there the following day at 12 noon, with burial afterwards in Bohernabreena Cemetery. May he rest in peace.