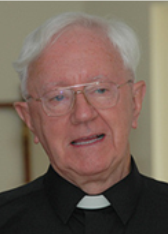 Patrick was born on 25 June 1931 in Dublin, Ireland. His father, Kieran, married to Patricia (née Broderick), was a gardener. Patrick had three brothers and one sister. He passed his matriculation in a school in Dublin run by the Christian Brothers, and afterwards, from 1950 to 1951, did a year in Freshford. He then went to Roosendaal, The Netherlands, to study Philosophy from 1951 to 1954. He studied Theology in St Joseph’s College, Mill Hill, London from 1954 to 1958. On 6 May 1957 he took the Perpetual Oath at Mill Hill and was ordained priest on 13 July 1958 at Mill Hill by Archbishop Godfrey.

Patrick’s first appointment was to Nellore, India, where he taught in the Diocesan seminary. In 1969 he moved to Hyderabad to teach in St John’s Regional Seminary which catered for students from all over the State of Andhra Pradesh. In 1975 he moved to Bangalore to engage in the ministry of Marriage Counselling. In 1978 he became the chaplain in St Martha’s Hospital. He returned to Ireland in 1982 and helped out in promotion work in the Diocese of Kilmore. In 1983 he left for Kenya, where he taught first in the minor seminary at Lwak in Kisumu Diocese and later in St Mary’s Major Seminary, Molo.

From 1990 to 1995 he spent some half year periods – the maximum duration of a tourist-visa – in India to help the small group of Mill Hill Missionaries there in recruiting Friends of Mill Hill. The other half year he would work in the seminary in Molo, Kenya, except from 1993 to 1995 when he served in our Formation House in Luanda, Kenya.

Gradually Patrick phased out working in Kenya and thus was able to give more support in setting up Mill Hill formation in India. This continued for a number of years until a providential meeting with the Indian Ambassador in Ireland led to him being given a long-term visa. He continued to build up the ‘Friends of Mill Hill’ zealators among the mainly English-speaking parishioners. He also wrote short reflections on the Gospel for a calendar published in India.

On the occasion of his Golden Jubilee the Superior General wrote in a message of congratulations: “Your deep love of India (…) did not prevent you from combining your commitments in India with substantial and regular periods of ministry in Kenya. Your ability to straddle these two very diverse cultures is testimony to your adaptability and missionary skilfulness.” In 2015 Patrick was appointed to retirement at St Joseph’s House, Rathgar, Dublin. The last year of his life he spent in Foxrock Nursing Home where he peacefully died last night. May Patrick rest in peace.

Reception of the body will take place at Mill Hill Missionaries, St. Joseph’s House, Rathgar, Dublin on Wednesday 2 October at 3.30 pm followed by prayers and repose. The Funeral Mass will be on Thursday 3 October at 11.00 am followed by burial at Bohernabreena Cemetery.”