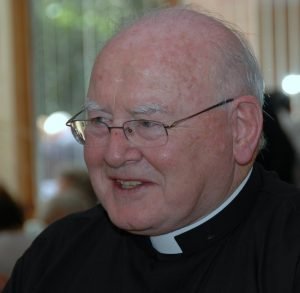 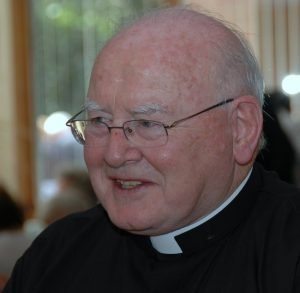 It is with regret that we inform you of the death on Friday morning, 27th April 2018, in Calvary Hospital, the Bronx, New York, aged 85, of

Terry was born on 4th November 1932 in Cootehill, Co. Cavan, Ireland. His father, Thomas, who was a farmer, was married to Margareth (née McCabe). He had seven brothers and three sisters. One of his brothers, Hugh, also joined the Mill Hill Missionaries. From 1946 to 1951 he followed secondary education at our college in Freshford. Then he went to Roosendaal to study Philosophy for two years. During the following four years he studied Theology in St Joseph’s College, Mill Hill, London. He took the Perpetual Oath on 7th May 1956 and was ordained priest on 7th July 1957 by William Cardinal Godfrey.

After ordination Terry was appointed to study for a degree in Agriculture at the University of Cork. After three years in Cork the course was transferred to Dublin. He complemented this with a one year course leading to a Diploma in Higher Education in 1963. He was then appointed for three years to the teaching staff of our college in Freshford.

Following this he was appointed to North America where he spent the next 52 years, almost his entire missionary life. He worked in St. Louis for eleven years, and subsequently served in Los Angeles and in New York. Most of these years he was appointed to Society positions as rector, regional bursar, and consultor. In 1995 he was elected Regional Representative and was re-elected to this post in 1998.

Terry dedicated most of his time to work that was vital to the Society’s mission worldwide, in particular mission animation and fund-raising, but he also took great interest in urban pastoral work. The missionary zeal with which Terry applied himself to his work is summed up aptly in the words to be found in a General Council visitation report: “I found Terry genuinely interested in his work and ready to do for the Society whatever he can”. The pastoral supply work which he continued in different parishes up until recently was much appreciated by the parishioners.

In the last few years Terry’s health had started to decline and he was admitted to hospital in 2016. He suffered from cancer in the neck, with secondaries to the lungs. Immunotherapy held the cancer in check for a while, but did not eliminate it. Last year he celebrated his Diamond Jubilee and despite advancing age and illness remained active and enthusiastic in his role as rector and in pastoral work. On the morning of Friday 27th April he passed away in Calvary Hospital in the Bronx.

The wake will be held atRiverdale-on-Hudson Funeral Home, the Bronx, NY, on Sunday 29th and Monday 30th April. On Tuesday 1st May at 10.00 am Mass will be celebrated at St Margaret of Cortona Church, Riverdale, the Bronx. The body will be cremated and the ashes brought to Ireland for interment in the Mill Hill plot of the Bohernabreena Cemetery in Dublin. The details of this will be communicated when they become available.