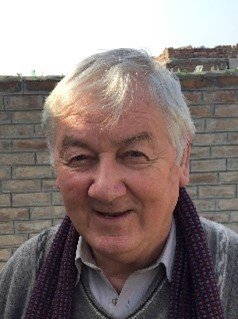 It is with regret that we inform you of the death on the 9th day morning of May, 2021 in Nowshera, Pakistan aged 75 of

Tom was born on the 8th of June, 1945 in Ashbourne, Co. Meath in Ireland. He received the sacrament of Baptism two days after his birth on the 10th of June at St. Andrew’s church in Curraha, Co. Meath. His parents were Thomas, a builder (+1988), and his mother was Mary Rafferty, nee Armstrong (+1992). He was born into a modest family of seven children; he had three brothers and three sisters.

For his initial, primary education, Tom attended his local school. However, since at a young age he felt called to the missionary priesthood, he fulfilled his secondary school requirements in our college at Freshford (1958-1963). Having completed his secondary schooling, Tom was promoted to study Philosophy and associated subjects in Dartry, Dublin. At the end of his studies there he achieved a B.A. Degree in Philosophy (1963-1966). Still convinced of his vocation, Tom proceeded to Saint Joseph’s College, Mill Hill, London, to study Theology (1966-1970). As his theological studies came to completion, he took the Perpetual Oath to God and in our Missionary Society on the 1st of May, 1969 in the College Chapel. Just over a year later, on the 27th of June, 1970 Tom was ordained a Mill Hill Priest in St. Patrick’s church, Donaghmore, Co. Meath, Ireland at the hands of Bishop John McCormack.

Tom’s first “Missionary” appointment was to work in the Apostolic Vicariate of Kota Kinabalu, Sabah, Malaysia. Sadly, a few months after receiving this appointment, he was told that the government authorities had refused his visa application. Tom was among many of our missionaries to experience visa difficulties concerning Malaysia. Undeterred, Tom quickly accepted an appointment to work in Rawalpindi Diocese in Pakistan. By November 1970 he stepped onto what would be his “Home” for the next fifty-one years. He started his ministry in Gujarat, working with his fellow Mill Hillers. Later he moved to Kohat, then on to the beautiful city of Peshawar which borders Afghanistan and is the gateway to the famous Khyber Pass, working with both fellow missionaries and local clergy and religious. It was in 1989 that Tom was first appointed to work in Holy Name Parish within the cantonment area of Nowshera. Here, Tom planted his heart! Shortly into his ministry in and from Nowshera he recognised the need for female companions who would complement the spread of the Good News through some of the most isolated Christian communities living and working in the foothills of the Himalaya, especially through the Swat Valley and through the Karakoram Mountains. Tom’s dream was fulfilled when he founded the Missionaries of Saint Thomas, greatly assisted by Sr. Iris Gill. The beginnings were small and the hurdles formidable, but the Sisters continue to witness still. During his time in the North, Tom endured many “Obstacles”; violent robbery in 1996, much political intrigues, personal bouts of ill-health in 1998 and in 2014. Nothing deterred him from his dedicated love and service to the peoples for that vast and beautiful, “Land of the pure”.

On the occasion of Tom’s Silver Jubilee of Priesthood, the General Council noted, “Your colleagues in Islamabad/Rawalpindi (Archdiocese) admire your faith and courage; they are happy with your initiatives, even if they themselves feel unable to do such work.” This sums up Tom’s being a man of vision, dedication and courage in a very particular area of the Lord’s Vineyard. Recently, Tom contracted the Covid-19 virus. He was hospitalised and received excellent care. Sadly, he succumbed to this terrible virus after a brave fight for life earlier today enveloped by the prayers of family, friends and colleagues. His funeral shall take place on Monday the 10th of May at 11.00.am in Rawalpindi Cathedral. A further Requiem Mass will take place in Holy Name Parish, Nowshera Cantonment on Tuesday 11th of May at 4.00.pm. Eternal rest grant unto him, O Lord.