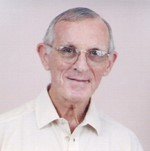 It is with regret that we inform you of the death on the morning of the 17th day of December, 2020 at The Antique Medical Center, San Jose, Antique, Philippines, at the age of 91 of

Bill, as we in Mill Hill affectionately knew him, was born on the 25th of June, 1929 in Bathgate, Scotland. His father, Owen, was a steel worker in a nearby factory in Bathgate, and his mother was Mary (Kelly) McAvoy. Bill had one brother and one sister.

For his Secondary Education, Bill attended the Mill Hill Missionaries’ schools at Freshfield, 1944-49, then at Burn Hall near Durham, 1949-51, where he obtained his General Certificate of Education. Convinced of a Missionary Vocation, Bill proceeded to study Philosophy at our College in Roosendaal, Holland, 1951-53, then Theology at St. Joseph’s College, Mill Hill, London, England, 1953-57. Toward the end of his theological studies, Bill took the Perpetual Oath as a Mill Hill Missionary on the 7th of May, 1956. Just over a year later, he was ordained a Mill Hill priest on the 7th of July, 1957 at the hands of William Cardinal Godfrey in the chapel of Saint Joseph’s College, Mill Hill, London.

Bill’s first missionary appointment was to Uganda, East Africa. After arriving in Orungo in November, 1957, Bill was appointed to the parish of Soroti in December, 1957, where he stayed until January 1959 when he took up a teaching appointment at Nagongera Seminary. In late 1964 Bill enjoyed his first “Home Leave” from his Uganda mission. Within a few short months, he was back to Nagongera Seminary giving another five years of dedicated teaching. By 1970, Bill was due another period of Home Leave. This was extended to allow him to study at Saint Mary’s College, Strawberry Hill in London. He graduated from there in 1972 and shortly thereafter, returned to Uganda, for an hour! He was swiftly deported from the airport. A dramatic and unpleasant experience for Bill. Bill returned to London and continued his studies at Heythrop College, London. After graduating from there, he returned to East Africa in 1974, this time to work in the Diocese of Kisii, Kenya, particularly in the Diocesan Seminary at Rakwaro. In 1986 Bill was appointed Headmaster of Rarua School in Kisii, where he also assisted in the local parish. Sharing his talents, Bill was also a tutor and chaplain at Mawego Technical School. By 1990 Bill was promoted to be Kisii Diocese’s Coordinator of Religious Education and Faith Awareness Programme based in Nyabururu. After an accident, in the middle of 1991, Bill was forced to take extended Home Leave. As he recovered, he followed a Renewal Course in Spokane, Washington State, USA until 1993. Ready for new beginnings, Bill accepted an appointment in the Philippines in 1994. He was based in the Diocese of Antique on the island of Panay, where he became chaplain/tutor to the Mensa Domini Sisters in San Jose, Antique, taught in various schools and helped in many pastoral projects. Bill’s contribution to the thriving of the Diocese of San Jose, and the effective work of the Mill Hill Missionaries in the Philippines cannot be underestimated. Bill’s quiet, unassuming and generous presence touched and changed many, many lives. Bill grew to love the Philippines, opting to retire there.

A couple of days ago Bill was admitted to hospital with breathing difficulties. Having been tenderly cared for by many of the Mensa Domini Sisters and his friend, Dra. Erispe, for some time now, he died peacefully this morning. The funeral of Bill will take place on Thursday the 22nd of December at the Mensa Domini Chapel in San Jose at 9.30.am. Burial will follow in the San Jose Catholic Cemetery.