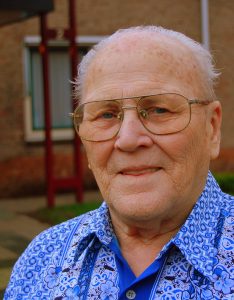 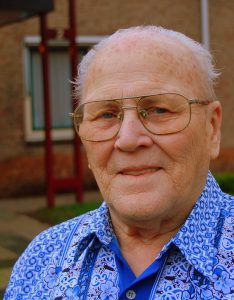 It is with regret that we inform you of the death at 1:30 a.m. on Friday, 17th November2017, at Missiehuis Vrijland, Oosterbeek, The Netherlands, aged 87, of

Wilhelmus Jacobus Bos, who bore the same name as his father, was born in Alkmaar, The Netherlands, on 11 November 1930. His father was a farmer as well as the honorary mayor of a nearby village. He was married to Cornelia Bos (née Bommer). His birth was two months premature and the baby weighed just two pounds. He was not expected to live long, and as soon as he was allowed to leave the incubator, he was baptised. Wim had four brothers and one sister, all older than he.

He followed secondary education in our colleges in Hoorn, from 1945 to 1949 and in Haelen, from 1949 to 1951. He then went on to study Philosophy for two years in Roosendaal, The Netherlands. After that he left for Mill Hill, London, to study Theology from 1953 to 1957. He took the Perpetual Oath on 7 May 1956 and was ordained priest on 7 July 1957 by Archbishop William Godfrey of Westminster, together with 39 classmates.

In that same year he left for Kuching, Sarawak, where he had been appointed. The whole of his long missionary life Wim worked in Sarawak, both in remote and up-river missions as well as in town. He immersed himself in the Iban culture and language. The list of places where he served starts in Kanowit where he arrived in the year of his ordination. A year later he was appointed to Song, and four years later, in 1962, to Binatang, where he stayed for two years. He then returned to work in Song for six years. In 1970 he was appointed to Julau. Three years later he went back to Kanowit where he worked until 1988. In that year he was appointed to the town of Sibu, where he worked for eleven years. He included in his work looking after the longhouses in the Igan and Oya region. In 1999 he was transferred to the up-river mission of Julau, where he served for three years, after which he returned to Sibu. This was to be the place where he continued to serve until his retirement to ‘Missiehuis Vrijland’, in Oosterbeek, The Netherlands, in August 2011.

Wim lived a life of simplicity and had a good sense of humour. Apart from engaging in the mission work he also accepted additional responsibilities. In 1987 the bishop had made him Episcopal Vicar for the Iban people. He was elected Society Representative for Sarawak in 1992 and re-elected in 1995. In 1994 the Dutch government made him a Knight in the Orde van Oranje Nassau.

A few weeks ago Wim was admitted to hospital with pneumonia for some days. Though he returned to Missiehuis Vrijland for further recovery, he remained fragile. A week before his death he celebrated his 87th birthday in the presence of many members of his family. Last night he died peacefully.

The Mass of Requiem will be celebrated on 22 November in Missiehuis Vrijland at 11.00 am followed by the interment in our cemetery there.